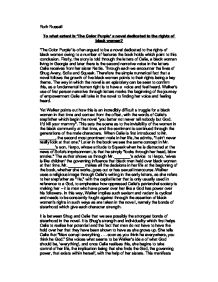 To what extent is 'The Color Purple' a novel dedicated to the rights of black women?

Ruth Russell To what extent is 'The Color Purple' a novel dedicated to the rights of black women? 'The Color Purple' is often argued to be a novel dedicated to the rights of black women owing to a number of features the book holds which point to this conclusion. Firstly, the story is told through the letters of Celie, a black woman living in Georgia and later there is the second narrative voice in the letters Celie receives from her sister Nettie. Through each we encounter the lives of Shug Avery, Sofia and Squeak. Therefore the simple numerical fact that a novel follows the growth of five black women points to their rights being a key theme. The way in which the novel is an epistolary can be seen to confirm this, as a fundamental human right is to have a voice and feel heard. Walker's use of first person narrative through letters marks the beginning of the journey of empowerment Celie will take in the novel to finding her voice and feeling heard. Yet Walker points out how this is an incredibly difficult struggle for a black woman in that time and context from the offset, with the words of Celie's stepfather which begin the novel "you better not never tell nobody but God. ...read more.

This manifests itself in the success of her pants-making business and in the development of her first true adult relationship, that of the s****l side she shares with Shug. This is an arguable feature of the novel as a dedication to black women's rights, however, as Celie's experiences up of men throughout her life have been violent and oppressive. She says she likes to look at women because she's not scared of them, and in this way we encounter the debate of whether sexuality is in our nature or whether it can be the result of the circumstances we are brought up in. This would appear to be a theme that people can identify with universally, and not just a struggle of black women. However the theme of sisterhood enabling the empowerment of black women continues very strongly once Celie has found her voice. This is most evident when she leaves Mr. _______ , telling him"I'm pore, I'm black, I may be ugly and can't cook...But I'm here." She then helps her sisters around her to find theirs; and an example can be made in the way that after Celie tells Harpo "if you hadn't tried to rule over Sofia the white folks never would have caught her" Sofia, who has been silent, speaks. ...read more.

Walker seems to emphasise the slavery echoed in Celie's letters by the metaphorical slavery that appears to be in practise in various parts of the novel. Adam, Celie's second child, "is sold to a man over in Monticello" and Celie herself is given away with "a cow she raise down there back of the crib" as a dowry. The r**e that Celie was also forced to endure at the hands of Alphonso is also reminiscent of the s*x female slaves were made to have with their white land-owning slave masters. However, even concerning slavery Alice Walker does not concentrate on the evils white people at that time committed in buying and selling black people like cattle for use as slaves, and then treating them despicably whilst they worked, often killing them. She also considers the fact that other black people played a part in the slave industry by selling slaves on. Walker captures how this is often ignored by black people in the way she depicts the Olinka as "not want[ing] to hear about slavery" and acknowledging "no responsibility" for it whatsoever. In this way 'The Color Purple' covers many issues of oppression in many societies, and in my opinion acts more as a novel of affirmation to people of every race, colour and creed to have value in themselves than just to the rights of black women. ...read more.