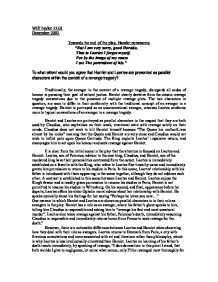 To what extent would you agree that Hamlet and Laertes are presented as parallel characters within the context of a revenge tragedy?

Will Taylor 12G1 December 2002 Towards the end of the play, Hamlet comments: "But I am very sorry, good Horatio, That to Laertes I forgot myself. For by the image of my cause I see The portraiture of his." To what extent would you agree that Hamlet and Laertes are presented as parallel characters within the context of a revenge tragedy? Traditionally, the avenger in the context of a revenge tragedy, disregards all codes of honour in pursuing their goal of natural justice. Hamlet clearly deviates from the classic revenge tragedy conventions due to the presence of multiple revenge plots. The two characters in question, are seen to differ in their conformity with the traditional concept of an avenger in a revenge tragedy. Hamlet is portrayed as an unconventional avenger, whereas Laertes conforms more to typical conventions of an avenger in a revenge tragedy. Hamlet and Laertes are portrayed as parallel characters in the respect that they are both used by Claudius, who capitalises on their weak, emotional state with revenge solely on their minds. Claudius does not wish to kill Hamlet himself because "The Queen his mother/Lives almost by his looks" meaning that the Queen and Hamlet are very close and Claudius would not wish to inflict pain upon Queen Gertrude. The King exploits Laertes' impulsive nature, and encourages him to act upon his honour and seek revenge against Hamlet. ...read more.

In Elizabethan times, in the renaissance period, people became sceptical of the chivalric code and began to doubt its importance in society. Laertes would have been tought that justice and defence were two important aspects of the code and so it would be natural to him to bring Hamlet to justice, and defend his father's name. In contrast, Hamlet, on learning of his father's murder is asked by the ghost of his father to revenge the death. He is hesitant and procrastinates, wishing he had not been asked to complete such a task, "the time is out of joint. O cursed spite, that ever I was born to set it right!" Hamlet defies convention in the manner that he shuns his inherited role as an avenger, but is unable to avoid the reality that it is his destiny. He has lived his life as a scholar, going through university, with student friends such as Guildenstern and Rosencrantz, being trained in thought, giving him the ability to rationalise. However, he disregards this in his second soliloquy where he claims, "...from the table of my memory I'll wipe away all trivial fond records, All saws of books, all forms, all pressures past That youth and observation copied there, And thy commandment all alone shall live Within the book and volume of my brain..." ...read more.

Claudius suggests that Hamlet has a particularly strong unspoken bond with his mother, stating "The queen his mother/Lives almost by his looks" In the Laurence Olivier interpretation of Hamlet, the opening line states ''this is the tragedy of a man who could not make up his mind''. The reason for Hamlet's procrastination is complex. He wishes to gain honour by avenging his father's death, but is doubting and undecided of his abilities to do what he has been instructed to do by the Ghost of Hamlet. Hamlet is apprehensive and agonizes over what he is to do, and how he is going to avenge the murder of his father. In sharp contrast, Laertes' actions are impulsive. However, despite the impulsive actions of Laertes in challenging a duel with Hamlet, Laertes is does not possess the cruelty and spitefulness that his opposition does. Hamlet not only wants to avenge his father's death, he wishes Claudius to be eternally punished, just like the Old King Hamlet who is being tortured in purgatory. Therefore, Hamlet does not kill Claudius in the scene where Claudius is praying, when there is a chance Claudius might be confessing his sins. Laertes wants revenge, but he is not concerned with punishment, he is concerned with physical and the present. Hamlet however, cares about Claudius' afterlife. Hamlet and Laertes the two extremes of the act of revenge: Hamlet thinks reason before action. Laertes acts on impulsion and without reasoning. Revenge was the driving force behind both characters' actions and it led to their eventual down fall. ...read more.