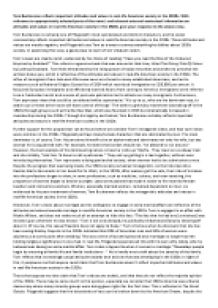 In real life, Fitzgerald experienced this with his own wife, Zelda, who he believed was having an extra-marital affair. Tom is also a hypocrite when it comes to marriage: ?Nowadays people begin by sneering at family life and family institutions?? He is hardly one to talk about the sanctity of the family. Tom reflects that increasingly casual attitude towards love and s*x that was developing in the 1920s. In light of this, it perplexes me that anyone could claim that Tom Buchannan doesn?t reflect important attitudes and values in real-life American society in the 1920s. Those that oppose my view claim that Tom?s values are archaic, and that they do not reflect the majority opinion of the 1920s. There may be some merit to this opinion, especially we consider that 1920s America was a liberal democracy where many minority groups were being given rights for the first time. This is reflected in The Great Gatsby. Fitzgerald suggests that the boundaries of race can be broken down by the American Dream, despite the archaic views of men like Tom. When the characters are driving into New York they pass a car, ?driven by a white chauffeur, in which sat three modish n*****s, two bucks and a girl.? A white man serving black people is a reversal of the r****m that had dominated society until this point. ...read more.

People like Tom were resented rather than admired, which is captured in Nick?s final remark about Tom: ?They were careless people, Tom and Daisy- they smashed up things and creatures and then retreated back into their money.? In light of this, the case could be made that Gatsby is a better representative of attitudes and values in 1920s America instead of Tom, especially with regards to money and work. Gatsby has certainly worked hard to acquire all that he has. According to Thomas Wolfe, every man in America has the right to become, ?whatever thing his manhood and his vision can combine to make him." This certainly applies to Gatsby. He represents the American Dream of self-made wealth and happiness, the spirit of youth and resourcefulness, and the ability to defy his past and make something of himself. This directly contrasts to Tom?s attitudes of apathy, laziness and entitlement that alienate him from the attitudes and values of the 1920s. To conclude, after careful consideration we determine that, for the most part, Tom Buchannan reflects important attitudes and values in real-life American society in the 1920s. The same could also be said of many of Fitzgerald?s characters, because many critics have taken The Great Gatsby to be an extended social commentary on the attitudes and values of the 1920s. The opposing arguments have some merit but ultimately they fail to realise the true implications and context of The Great Gatsby. ...read more.