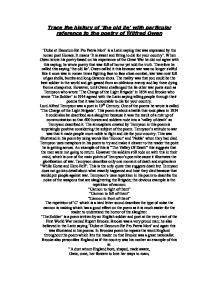 Trace the history of 'the old lie' with particular reference to the poetry of Wilfred Owen 'Dulce et Decorum Est Pro Patria Mori' is a Latin saying that was expressed by the roman poet Horace. It means 'It is sweet and fitting to die for your country'. When Owen wrote his poetry based on his experience of the Great War he did not agree with this saying; he wrote poetry that was full of horror yet told the truth. Therefore he called this saying 'the old lie'. Owen called it this because war was no longer skilful like it once was in roman times fighting face to face close combat, war was now full of gas shells, bombs and long distance shots. The reality was that you could be the best soldier in the world and get gassed from an oblivious enemy and lay there dying from a cheap shot. However, until Owen challenged the lie other war poets such as Tennyson who wrote 'The Charge of the Light Brigade' in 1854 and Brooke who wrote 'The Soldier' in 1914 agreed with the Latin saying telling people through their poems that it was honourable to die for your country. Lord Alfred Tennyson was a poet in 19th Century. One of the poems he wrote is called 'The Charge of the Light Brigade'. This poem is about a battle that took place in 1854 it could also be described as a slaughter because it was the result of a mix up of communication so that 600 horses and soldiers rode into a 'valley of death' as Tennyson described it. The atmosphere created by Tennyson in this poem is surprisingly positive considering the subject of the poem. Tennyson's attitude to war was that it made people more noble to fight and die for your country. This was illustrated in his poem by using words like 'Honour' and 'Noble' when they had died. ...read more.

and should be known as the old lie because if it is noble and honorable to fight and die for your country why is there no funeral for these great soldiers. Owen also in this poem talks about death on the battlefield an example of this is; "Not in the hands of boys, but in their eyes Shall shine the holy glimmers of goodbyes." This is Owen referring to what he has witnessed on the battlefield and is mainly talking about death this is again at contrast to Brooke who never referred to anything bad or evil in his poem he only focused on positive thoughts whereas Owen tells the whole truth which he gets across to the reader very well because he has been there and witnessed these horrific things happening. This line is also very visual because when you read it you can imagine what Owen has witnessed on the battlefield this line being about the death of the young and they say goodbye through there eyes because they are unable to move or speak. Owen helps himself to get his point across to the reader by using incredible sound imagery in his poem so that the reader can almost put there selves on the battlefield and hear what Owen hears an example of this; "Stuttering rifles rapid rattle". This line is a good example because of the alliteration that Owen uses by making a't' appear five times in a four word phrase, t is a very hard letter so it is really good to use for sound imagery about the thing Owen is describing. This is an opposite to Brookes style of writing in "The Soldier" as Brooke uses softer letters like the letter 's' which appears a number of times in Brookes poem. From the analysis that I have done of one of Owens poems it is clear to see that Owen does not believe in the Latin Phrase, Thus calling it 'The Old Lie'. ...read more.

if the reader could hear what he has heard felt what he has felt and see what he has seen then he says; "My friend, you would not tell with such high zest To children ardent for some desperate glory, The old Lie: Dulce et decorum est Pro patria mori. This is a perfect ending to the poem because he is addressing the reader and making it clear to the reader that he is saying the Latin saying is 'The Old Lie' and that this poem incorporates the concept of 'The Old Lie'. After all the visual and sound description Owen included in the poem which was supposed to shock and get the attention of the reader. Then Owen either let them believe the truth for themselves and if they didn't then he quotes the truth at the end to be certain that everyone gets the point that Brooke and Tennyson are no longer right about war, that it is no longer sweet and fitting to die for your country and that war is certainly not noble and honorable. The history of the old lie is that it means that it is sweet and fitting to die for your country. It was believed by many poets of whom two are known as Brooke and Tennyson. These are two well known poets that made the majority of the public believe in the old lie through their own poetic techniques which included positive thinking and heroism but through the poetry examined it can be seen that the attitudes to war have moved from believing the old lie and thinking that war is noble and honorable, to the majority thinking that war is horrific, evil and inhumane this is due to the effect of poems written by poets such as Wilfred Owen which had such an effect on peoples attitudes to war that they begin to believe a complete contrast of what they believed before. This is due to Owen explaining the concept of the old lie. ...read more.