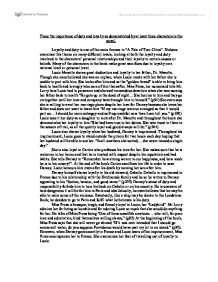 Trace the importance of duty and loyalty as demonstrated by at least three characters in the novel.

Trace the importance of duty and loyalty as demonstrated by at least three characters in the novel. Loyalty and duty is one of the main themes in "A Tale of Two Cities". Dickens examines this theme on many different levels, looking at both the loyalty and duty involved in the characters' personal relationships and their loyalty to certain causes or beliefs. Many of the characters in the book make great sacrifices due to loyalty on a national level or personal level. Lucie Manette shows great dedication and loyalty to her father, Dr. Manette. Though she once believed she was an orphan, when Lucie meets with her father she is unable to part with him. She looks after him and as the "golden thread" is able to bring him back to health and lovingly take care of him thereafter. Miss Pross, her nursemaid tells Mr. Lorry how Lucie had to persevere and showed tremendous devotion when she was nursing her father back to health "He gets up in the dead of night... She hurries to him and they go on together until her love and company have brought him to himself." (p94) She even says she is willing to avert her marriage plans despite her love for Darnay because she loves her father and does not want to leave him "If my marriage were so arranged as that it would part us... ...read more.

"I don't care an English Twopence for myself. I know that the longer I keep you here, the greater hope there is for my Ladybird." (p352) Miss Pross then starts a violent fight with Madame Defarge though she had "Never struck a blow in her life" and when a pistol accidentally is shot and kills Madame Defarge, Miss Pross is deafened for life. The fight between these two women shows how Miss Pross was stronger in her loyalty to Lucie than Madame Defarge was in her hatred- "love, always so much stronger than hate." (p353) Miss Pross also remains loyal to her brother even though he had previously stolen all of her money and left her. She says that Solomon was "the one man worthy of Ladybird" (p92) and that he "Had the makings in him of one of the best and greatest men in his native country." (p284) The revolutionaries in France prove that a new, fairer French republic can only be achieved with heavy and terrible costs. Personal loves and loyalties must be sacrificed for the good of the nation. When Darnay is arrested for the second time, the guard who seizes him reminds Manette that state interests should be held above personal loyalties. ...read more.

"For you, and for any dear to you, I would do anything." Carton single-handedly thinks up a plan and arranges that he replaces Darnay at the guillotine. Carton's love for Lucie eventually makes him a better person, knowing that he will save Darnay radically changes him, "For the first time in many years, he had no strong drink." (p324) Even Mr. Lorry notices the change in him "His manner was so fervent and inspiring," (p330). For the first time Carton feels like his life may have a purpose and could be useful "Of little worth as life is when we misuse it," (p322)Carton's loyalty to Lucie is extremely important for him, in choosing to die for her, Carton not only enables their happiness but also ensures his spiritual rebirth. "It is a far, far better thing that I do than I have ever done, it is a far, far better rest that I go to than I have ever known." (p361) We can see through all these characters how important loyalty and duty is. For some people like Carton and Miss Pross, it provides a purpose in life. For others such as Dr. Manette, Lucie and Darnay, duty is what they feel is the right thing to do. Overall, Dickens shows us that duty and loyalty can make you a better person and that sometimes sacrifice is necessary to achieve happiness or to produce something good. ...read more.