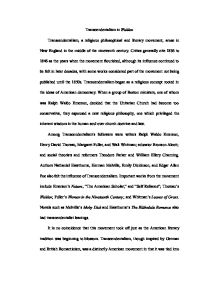 Transcendentalism in Walden Transcendentalism, a religious philosophical and literary movement, arose in New England in the middle of the nineteenth century. Critics generally cite 1836 to 1846 as the years when the movement flourished, although its influence continued to be felt in later decades, with some works considered part of the movement not being published until the 1850s. Transcendentalism began as a religious concept rooted in the ideas of American democracy. When a group of Boston ministers, one of whom was Ralph Waldo Emerson, decided that the Unitarian Church had become too conservative, they espoused a new religious philosophy, one which privileged the inherent wisdom in the human soul over church doctrine and law. Among Transcendentalism's followers were writers Ralph Waldo Emerson, Henry David Thoreau, Margaret Fuller, and Walt Whitman; educator Bronson Alcott; and social theorists and reformers Theodore Parker and William Ellery Channing. Authors Nathaniel Hawthorne, Herman Melville, Emily Dickinson, and Edgar Allen Poe also felt the influence of Transcendentalism. Important works from the movement include Emerson's Nature, "The American Scholar," and "Self Reliance"; Thoreau's Walden; Fuller's Woman in the Nineteenth Century; and Whitman's Leaves of Grass. ...read more.

Along with Ralph Waldo Emerson, Thoreau helps to promote the philosophy spreading across America and changes American way of thinking forever. Living solitarily on the shores of Walden Pond for two years, Thoreau elaborates his firm beliefs of transcendentalism in his philosophical work Walden, especially his opinions on the wisdom and divinity of nature and the significance of self-reliance in the individual. On one hand, Thoreau believes that man can fulfill his search for knowledge of the world and of himself the moment when he communicates with nature. Transcendentalism explains that nature will teach truth and wisdom to those who listen and respect her. To learn of the world, man must respect nature rather than encroach upon her. Thoreau explains that "Nature has no human inhabitant who appreciates her...she flourishes most along far from the towns where they reside" (166). He also stresses that man must study nature and become one with it in order to discover himself. Thoreau achieves this union with nature during the course of his stay at Walden Pond. He says "I come and go with a strange liberty in nature, a part of herself" (107). ...read more.

He writes that "The head monkey at Paris puts on a traveler's cap, and all the monkeys in America do the same" (21). Thoreau greatly condemns this practice of fashion because it does not allow for an individual to express his own style. Transcendentalism teaches that nonconformity allows one to find his own identity. Thoreau suggests that "If a man does not keep pace with his companions, perhaps it is because he hears a different drummer" (269). He thinks that in discarding material desires, one might become self-reliant and that possessing this character leads to nonconformity and the celebration of the individual. From these analyses above, we could reach a conclusion that Thoreau is truly a transcendentalist. As a great believer in this philosophy, he stresses the divinity and wisdom of nature and the significance of self-reliance. He focuses on the individual and the relationship with himself, nature, and God. He considers living simply and plainly would free him to gain a greater understanding of the world around him. Understanding of the world around you could only come after gaining a greater understanding of yourself. Once people break away from the constraints of material desires are they free to begin to explore themselves and the world. ?? ?? ?? ?? ...read more.