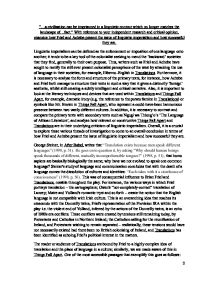 Translations and Things Fall Apart, examine how Friel and Achebe present the issue of linguistic imperialism and how successful they are.

"...a civilisation can be imprisoned in a linguistic contour which no longer matches the landscape of...fact." With reference to your independent research and critical opinion, examine how Friel and Achebe present the issue of linguistic imperialism and how successful they are. Linguistic imperialism can be defined as the enforcement or imposition of one language onto another; it tends to be a key tool of the colonialist seeking to mend the 'backward' societies that they find, generally to their own purpose. Thus, writers such as Friel and Achebe have sought to rectify the still ever present colonialist perceptions of the west by attacking the use of language in their societies, for example, Hiberno-English in Translations. Furthermore, it is necessary to analyse the form and structure of the primary texts, for instance, how Achebe and Friel both manage to structure their texts in such a way that it gives a distinctly 'foreign' aesthetic, whilst still creating a subtly intelligent and critical narrative. Also, it is important to look at the literary techniques and devices that are used within Translations and Things Fall Apart, for example, dramatic irony (e.g. the reference to the potato famine in Translations) or symbols like Mr. Brown in Things Fall Apart, who represent a could-have-been harmonious presence between two vastly different cultures. In addition, it is necessary to contrast and compare the primary texts with secondary texts such as Ngugi wa Thiong'o's 'The Language of African Literature', and analyse how relevant or constructive Things Fall Apart and Translations are in their underlying criticism of linguistic imperialism. Overall, it is a crucial to explore these various threads of investigation to come to an overall conclusion in terms of how Friel and Achebe present the issue of linguistic imperialism and how successful they are. George Steiner, in After Babel, writes that "Translation exists because men speak different languages" (1998, p. 51). He goes on to question it, by asking "Why should human beings speak thousands of different, mutually incomprehensible tongues?" ...read more.

In addition, Achebe 'peppers' Things Fall Apart with Ibo words - this digression is an act of defiance to the colonists who felt they could just translate Ibo culture (religion, education and so forth). By this, Achebe means to illustrate the barriers of translation, in that there is no suitable word for, as an example, ogbanje, "one of those wicked children who, when they died, entered their mother's womb to be born again". Similarly, Achebe's conquest to turn the Colonialist's language back in on itself, Achebe wrote an essay called 'An Image of Africa: r****m in Conrad's Heart of Darkness'. Achebe analyses Western views of Africa (such as those of "that erudite British Historian Regius Professor of Oxford, Hugh Trevor Roper" (Achebe, 1961)) in stinging rhetoric which delivers the idea of that prolific early 'anti-colonialist' novelists like Conrad were, maybe unwittingly, r****t in themselves. Achebe writes: "Conrad was born in 1857...it was certainly not his fault that he lived... [in a] time when the reputation of the black man was at a particularly low level. But...there remains still in Conrad's attitude a residue of antipathy to black people...Certainly, Conrad had a problem with n*****s. His inordinate love of that word itself should be of interest to psychoanalysts. Sometimes his fixation on blackness is equally interesting as when he gives us this brief description [of a black person]: A black figure stood up, strong long black legs, waving long black arms... as though we might expect them to...wave white arms!" (Achebe, 1961) In this short except, it is noticeable how Achebe associates Conrad's conduplicatio of 'black' as sinister, and potentially in itself, a form of linguistic imperialism - in this, it is the fact that the word black (and n****r) has previously been held to have negative connotations or was created for a negative purpose, but both create a "'reputation of the black man...at a particularly low level" (Achebe, 1961). ...read more.

Again, irony is quite prevalent in Things Fall Apart with the most pertinent example falling, like Translations, at the end of the novel. This is the District Commissioner's reaction to Okonkwo's suicide: "Everyday brought him new material. The story of this man who had killed a messenger and hanged himself would make interesting reading. One could almost write a whole chapter on him. Perhaps not a whole chapter but a reasonable paragraph, at any rate." (Things Fall Apart, p. 197) This is ironic because after the lengthy and tumultuous tale of Okonkwo and his struggles to not be like his father, the complex hierarchy of elders and the intricacy of Okonkwo and his struggles to not be like his father, the complex hierarchy of elders and the intricacy of their traditions and religion, the District Commissioner feels it can only 'almost' be written about in one chapter, and designates to only a paragraph. This is highly representative of the failure of the white man to 'translate' the Ibo culture and ability into being a highly complex culture, and instead treats the colonisation of the Ibo people as "The Pacification of the Primitive Tribes of the Lower Niger" (Things Fall Apart, p. 197). In conclusion, both Achebe and Friel carefully construct stories using literary devices that serve to recreate their personal heritage of a realistic and pitiful community who fall victim to unrepentant imperialism. In this, they have been able to repudiate colonial superiority in particular in regards to language and colonial ideas of 'progression'. Whilst both portray three dimensional characters in that they are atomistic - for example, in Translations, Hugh's view of the English is different to Owen's which is in turn separate from Manus's - and provides a highly explorative analysis of linguistic imperialism and its effect on individuals and the community. To summarise, all of the text referred to in this essay, in their own ways, are deeply critical of the effects of linguistic imperialism, particularly in the context of colonialism and so-called 'progression'. ?? ?? ?? ?? 2 ...read more.