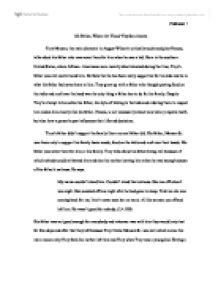 Troy Maxson, the main character in August Wilsons critically acclaimed play Fences, talks about his father who was never there for him when he was a kid. Born in the southern United States, where African- Americans were racially discriminated during th

Oh Father, Where Art Thou? Thy Son Awaits Troy Maxson, the main character in August Wilson's critically acclaimed play Fences, talks about his father who was never there for him when he was a kid. Born in the southern United States, where African- Americans were racially discriminated during the time, Troy's father was evil and tortured him. He feels that he has been really supportive for his kids and he is what his father had never been to him. Troy grew up with a father who thought putting food on the table and roof over the head was the only thing a father has to do for his family. Despite Troy's attempt to be unlike his father, his style of talking to the kids and ordering them to respect him makes him exactly like his father. Fences, is not necessarily about how history repeats itself, but also how a person's past influences their life and decisions. Troy's father didn't support the family like a normal father did. His father, Maxson Sr. was there only to support his family basic needs; food on the table and roof over their heads. His father was never there for him or his family. Troy talks about his father being evil because of which nobody could withstand him and also his mother leaving him when he was young because of his father's evilness. ...read more.

Troy thinks that he has freed himself from his father evil influence, reviews his past and tries to learn from his father's mistake. Since his father was irresponsible for him, Troy is inclined to be a father unlike his father in each and every way possible but unfortunately that doesn't work out. He turns exactly like his father. He doesn't support his sons Lyons and Cory at all. He is vile to both of his sons but Cory, his youngest son whose dream is to become a football superstar, gets affected and pays the price badly when his father shatters his dream by not letting him play. Since he and Troy don't get along, Cory feels isolated. Even when he asks Troy why he didn't like him, Troy responds: Liked you? Who the h**l say I got to like you? What law is there say I got to like you? Wanna stand up in my face and ask a d**n fool-a*s question like that. Talking about liking somebody...I go out of here every morning...bust my b**t...putting up them crackers every day... 'cause I like you?... It's my job. It's my responsibility! ... A man got to take care of his family... 'Cause it's my duty to take care of you. I owe a responsibility to you! (1.3.91 and 107) Troy lets Cory know that what it takes to become a "man". ...read more.

(2.4.71) When Troy battles with Cory he feels his son is more than capable to take care of himself and kicks Cory out of the house. He feels Cory has become a man because he stood up for himself. Standing up for own self is the character Troy sees as being an adult. He also realizes that his son has shown enough evidence of maturity when he fights with him. This reminds Troy what he did years ago with his father which is also the reason why Cory is kicked out of the house. Wilson's Fences lets us know that no matter how one tries to forget his/her past, it will always haunt him/her and will also come to play a significant role in the future. Troy grew up with a father who hardly supported him and once beat him to death. Although he tries not being like him, he follows each and every step his father had taken and in the end becomes a mirror of his father. He demands respect, thinks about himself, is unkind and harsh to his sons. Cory pays for the arrogance that his father shows but ends up being just like his father by arguing with him and leaving the house because he thinks he has matured enough. Fences in the end, symbolizes the barriers Troy who has faced and his son Cory who is going to face in life. Wilson in the end gives the readers a hope that Cory will break the barrier and become a good father to his kids unlike his father and his grandfather. ...read more.