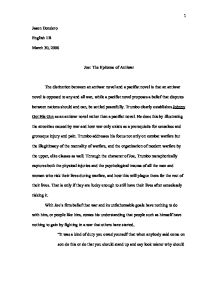 Trumbo establishes Johnny Got His Gun as an antiwar novel, rather than a pacifist novel, by illustrating the total negative effects of all war

Jason Dondero English 1B March 30, 2006 Joe: The Epitome of Antiwar The distinction between an antiwar novel and a pacifist novel is that an antiwar novel is opposed to any and all war, while a pacifist novel proposes a belief that disputes between nations should and can, be settled peacefully. Trumbo clearly establishes Johnny Got His Gun as an antiwar novel rather than a pacifist novel. He does this by illustrating the atrocities caused by war and how war only exists as a prerequisite for senseless and grotesque injury and pain. Trumbo addresses his focus not only on combat warfare but the illegitimacy of the mentality of warfare, and the organization of modern warfare by the upper, elite classes as well. Through the character of Joe, Trumbo metaphorically captures both the physical injuries and the psychological trauma of all the men and women who risk their lives during warfare, and how this will plague them for the rest of their lives. That is only if they are lucky enough to still have their lives after senselessly risking it. ...read more.

else that didn't mean anything...Give us a bill of sale drawn up plainly so we know in advance what we're getting killed for and give us also a first mortgage on something as security so we can be sure after we've won your war that we've got the same kind of freedom we bargained for" (112). If the words cannot be trusted to mean something - if these ideals cannot be truly promised - then it is not remotely worth risking one's life for. When approached with rhetorical words of encouragement to participate in the war, one must be wise enough to see through the empty promises. Joe becomes somewhat of an antiwar prophet and teaches us through his experience to have the confidence and dignity to not give in. Not to agree with the warped concept of accepting death as a reward of providing democracy and freedom for others. Because Joe is closer than anyone living to death, he has the presence to talk about death first hand and to make young, unassuming men and women stop and think about what they are really getting themselves into. ...read more.

If they say coward why don't pay any attention because it's your job to live not to die. If they talk about dying for principles that are bigger than life you say mister you're a liar...What's noble about having your legs and arms blown off? What's noble about being an idiot? What's noble about being blind deaf and dumb. What's noble about being dead?...You're dead mister and you died for nothing" (118-119). Joe's bitterness about the circumstances of his participation in the war is clearly apparent throughout the novel. His fundamental sense of betrayal is clearly expressed in his anger over the lack of protection provided by the very people who brainwashed Joe and the millions of unsuspecting others to fight for the cause of democracy in the first place. The extent of both the anger and fear that Joe experiences during his service becomes comprehensible when we see that his first reaction to realizing his deafness is relief - relief that he will never have to hear the sounds of warfare again. It is Trumbo's prerogative through the character of Joe to lead by example and to relay the messages of think before you act, do the ends justify the means, and know clearly what you perceive to be worth dying for. ?? ?? ?? ?? 1 ...read more.