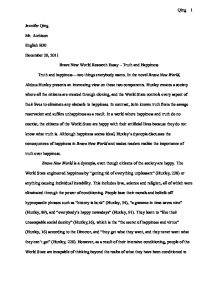 Truth and happinesstwo things everybody wants. In the novel Brave New World, Aldous Huxley presents an interesting view on these two components.

Jennifer Qing Mr. Atchison English B30 December 20, 2011 Brave New World Research Essay - Truth and Happiness Truth and happiness-two things everybody wants. In the novel Brave New World, Aldous Huxley presents an interesting view on these two components. Huxley creates a society where all the citizens are created through cloning, and the World State controls every aspect of their lives to eliminate any obstacle to happiness. In contrast, John knows truth from the savage reservation and suffers unhappiness as a result. In a world where happiness and truth do no coexist, the citizens of the World State are happy with their artificial lives because they do not know what truth is. Although happiness seems ideal, Huxley's dystopia discusses the consequences of happiness in Brave New World and makes readers realize the importance of truth over happiness. Brave New World is a dystopia, even though citizens of the society are happy. The World State engineered happiness by "getting rid of everything unpleasant" (Huxley, 238) or anything causing individual instability. This includes love, science and religion, all of which were eliminated through the power of conditioning. People base their morals and beliefs off hypnopaedic phrases such as "history is bunk" (Huxley, 34), "a gramme in time saves nine" (Huxley, 89), and "everybody's happy nowadays" (Huxley, 91). ...read more.

Science plays such a dominant role in human happiness that science takes on the role of religion in Brave New World. "You can carry at least half your morality about in a bottle. Christianity without tears-that's what soma is" (Huxley, 238). Happiness and morals based on science shows how the happiness of the people in the World State is artificial. To replace passion and emotional connections, the people of the World State rely on products of science such as soma. In the world that is known to people today, there is no soma. People deal with their emotions. There is poverty, history, families and love; there is truth. Truth involves knowing the good and the bad, experiencing happiness and sadness. John, who grew up on the savage reservation, has lived in the world outside the World State. He has seen truth. In his conversation with the Controller, John claims, "I don't want comfort, I want God, I want poetry... I want goodness. I want sin" (Huxley, 240). John chooses truth over happiness, "claiming the right to be unhappy" (Huxley, 240). In context with Plato's cave allegory, he chose face the outside of the cave. In facing the hard nature of life, John has lost his innocence and matured. ...read more.

Their happiness despite the sadness and the truth shines through the artificial happiness of the World State. In The Republic, Plato agrees with the importance of truth: "Good... is seen only with an effort; and, when seen, is also inferred to be the universal author of all things beautiful and right... and the immediate source of reason and truth in the intellectual...This is the power upon which he...must have his eye fixed" (Plato). Although the truth is harder to deal with than ignorance, the emotion and spiritual satisfaction of being truly happy should be what everyone strives for and cannot be achieved without accepting truth. Ignorantly blissful is easy, but in Brave New World, happiness achieved through animalistic methods is meaningless compared to the fulfillment of true happiness. In Brave New World, happiness and truth are separated. Citizens of the World State are happy in an artificial society, while in contrast, John lives an unpleasant but truthful life. People may instinctively want to sacrifice truth take the easy path to happiness, but being able to fully appreciate happiness through the hardships of truth is what makes life worth living. Truth or happiness? That is the final thought Huxley leaves with the reader at the end of the book when John is dangling, slowly turning in directionless circles. ...read more.