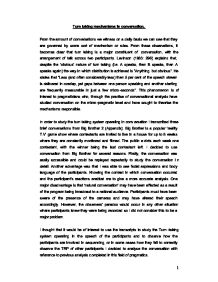 Turn taking mechanisms in conversation. From the amount of conversations we witness on a daily basis we can see that they are governed by some sort of mechanism or rules. From these observations, it becomes clear that turn taking is a major constituent of conversation, with the arrangement of talk across two participants. Levinson (1983: 296) explains that, despite the 'obvious' nature of turn taking (i.e. A speaks, then B speaks, then A speaks again) the way in which distribution is achieved is "Anything but obvious". He states that "Less (and often considerably less) then 5 per cent of the speech stream is delivered in overlap, yet gaps between one person speaking and another starting are frequently measurable in just a few micro-seconds". This phenomenon is of interest to pragmaticians who, through the practise of conversational analysis have studied conversation on the micro-pragmatic level and have sought to theorise the mechanisms responsible. In order to study the turn taking system operating in conversation I transcribed three brief conversations from Big Brother 2 (Appendix). Big Brother is a popular 'reality T.V' game show where contestants are invited to live in a house for up to 8 weeks where they are constantly monitored and filmed. The public evicts each week one contestant, with the winner being the last contestant left. ...read more.

This is the first TRP of the conversation, yet when B fails to respond immediately N decides to continue her turn until B decides to answer. . In studying the transcripts I identified a variety of ways in which a TRP can be signified. Completed syntactic units, such as questioning with a rising intonation often signals that a TRP is approaching. Tag questions such as 'you know'; P: It's alright yknow (.) there's piles on the fire Are used as an exit technique at TRP of a turn, signalling a turn is over and prompting other participants to take a turn. Until this point my analysis has concentrated mainly on the mechanisms operating when two speakers are engaged in conversation. However, the mechanism involved in turn taking is also capable of operating in circumstances with varying numbers of participants in a conversation without a specific order of speakers being pre-allocated. Despite this, the numbers of participants in a conversation affects transitions. "In a two party conversation, a current non-speaker can pass any given TRP which is non-obligatory (i.e. where 'current selects next' technique has not been used) with full assurance of being 'next speaker' at some point " (Sacks, Schegloff and Jefferson 1974: 712). The situation changes when there are more than two participants, as current non-speakers must self-select and will therefore be under constraint to self select at the first possible TRP in order to secure their turn. ...read more.

Transcript 3 shows an interesting example of preferred and disprefered turns. Speaker H addresses the group with an assessment, or an admittance of blame: H: We've failed it and it's all my fault Levinson (1983) explains how the preferred response, would be something syntactically simple, such as 'yes' whereas the disprefered response would be more lengthy. The opposite, is however true in this case of self-denigration. The preferred response would be an agreement, yet by using this the other speakers would be criticising H. To avoid this the other speakers must give the dispreferred response of disagreement. In this particular conversation the other speakers do not respond, the silence leading H to propose the issue again H:It's all my fault. Yet the silence she receives a second time, where B instead of administering her remark announces his disappointment to the rest of the group. Here the silence that H is exposed to appears to signify agreement with her assessment. To conclude, I have used the transcriptions collected to analyse the system of turn taking in respect of Sacks, Schegloff and Jefferson's theories (1974). I found their rules for the turn taking mechanism to be relevant to the conversations I analysed with sufficient evidence to support their rules. I also identified other points of interest within the transcripts and attempted to account for these using the theories of Mey (2001), Levinson (1983) and Tannen (1990). ...read more.