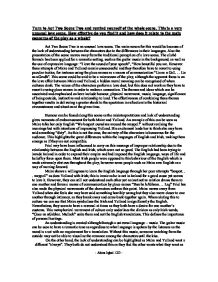 Turn to Act Two Scene Two and remind yourself of the whole scene. This is a very unusual love scene. How effective do you find it and how does it relate to the main concerns of the play as a whole?

Turn to Act Two Scene Two and remind yourself of the whole scene. This is a very unusual love scene. How effective do you find it and how does it relate to the main concerns of the play as a whole? Act Two Scene Two is an unusual love scene. The main reason for this would be because of the lack of understanding between the characters due to the differences in their languages. Also the presentation of the scene moves away from the traditional perception of a love scene. The clich� formula has been applied for a romantic setting, such as the guitar music in the background, as well as the use of expressive language: "I love the sound of your speech", "How beautiful you are. However these attempts of Maire and Yolland remain unsuccessful and they therefore have to revert to using peculiar tactics, for instance using the place names as a means of communication "Lis na n Gall. . . Lis na nGradh". This scene could be said to be a microcosm of the play, although the apparent focus is on the love affair between Maire and Yolland, a hidden moral meaning can be recognised of when cultures clash. ...read more.

Maire shows a willingness to learn the English language through her poor attempts "besport. . . maypoll" as does Yolland with Irish; this is ironic as he is not in Ireland for a good cause yet seems to love it. However, they can still not understand each other yet an instinctive relation draws them to one another and forms a means of communication by place names "Bun ha hAbhann. . . Lag" Friel has also made the physical movements of the characters enforce this point. Maire moves away from Yolland when she feels she may have said something horribly wrong but they also move closer to one another through intimacy, as they break away and come back together again. When relating this to culture we can see that Maire symbolises the Irish and Yolland is significantly the English. Nevertheless, they seem to have a reversal at times as they both have a desire for one another's customs. This metaphorical movement of culture only underlines the division as only Irish words, "Cnoc na nGabhar. ...read more.

It is a metaphorical expression as both are leaving their respective communities and at the same time learning of each others, as well as one another as they have no translator to help interpret their thoughts and views. Furthermore, by being outside they are more comfortable with one another and not held to any constraints, allowing the audiences to a gain a fuller insight. Act Two Scene Two is very effective as an extreme contrast can be seen through the characters misperception of one another, thus highlighting the historical differences between the not so good relationship with the Irish and the English The humour within this makes it appealing to the audience who are then keen to pay attention. The excessive instinctive relationship emphasises how the characters interact and communicate even though they do not speak the same language; as the ending of their conversation begins to flow along within each other, being built up by confusion, as if they know what the other is saying "Don't stop - I know what you're saying". I find this is effective as it leaves a deeper message in the minds of the spectators, as we are given more of an overall rounded view of the main picture. ...read more.