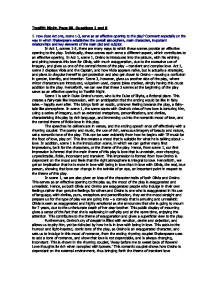 Twelfth Night, Page 88, Questions 1 and 8 1. How does Act one, scene 1-3, serve as an effective opening to the play? Comment especially on the way in which Shakespeare establishes the overall atmosphere, main characters, important relationships and key elements of the main plot and subplot. In Act 1, scenes 1-3, there are many ways to which these scenes provide an effective opening to the play. Individually, these scenes each serve a different aspect, which contributes to an effective opening. In Act 1, scene 1, Orsino is introduced into the picture, with his whining and pining towards this love for Olivia, with much exaggeration, due to the excessive use of imagery, and gives us one of the central theme of the play - transient and complex love. Act 1, scene 2 displays Viola and the Captain, and how Viola appears na�ve, but is actually a strategist, and plans to disguise herself to get protection and also get closer to Orsino - causing a confusion in gender, identity, and intention. Scene 3, however, gives us another side of the play, where minor characters are introduced, vulgarism used, coarse jokes cracked, simply having this crude addition to the play. Henceforth, we can see that these 3 scenes at the beginning of the play serve as an effective opening to Twelfth Night. Scene 1 is set in Duke Orsino's room, who is the Duke of Illyria, a fictional place. This creates a fairy-tale like impression, with an anticipation that the ending would be like in fairy tales - happily ever after. This brings forth an exotic, unknown feeling towards the play, a fairy-tale like atmosphere. In scene 1, the scene starts with Orsino's cries of how love is torturing him, using a series of imagery, such as extended metaphors, personifications, and similes, characterising this play by rich language, and immersing us into the romantic mood of love, and the central theme of fickle love in this play. ...read more.

A meaningful part is within scene 2, which is how the nature of human greed is displayed in the speech exchange between Viola and the captain, as the captain is overwhelmed by flattery and agrees to help Viola. Overall in scene 2, we are given an idea that Viola is interested in Duke Orsino, and tries to get closer to him, creating this love triangle, which moves the plot forward. This impression is formed from "For such disguise that shall become/The form of my intent". The intent here refers to how she wants to cover up her true identity and gender, and at the same time, cover up the other hidden intention of getting closer to Orsino. All these emphasize on the main theme, and give us a better perspective of disguise in the play, contributing both to the plot and effectiveness of the play, with a sense of excitement and gives variety to the plot of the play. Going on to scene 3, we have been introduced to the main characters of this play - Orsino, Olivia and Viola. Finally, we are introduced to some of the minor characters of this play - Sir Toby, Sir Andrew and Maria. A change from speaking in verses and poetry, to thus in prose, sets us right away to the fact that, these characters we are going to be introduced to next would be minor characters, those of a lower class or position, more unimportant. This is an effective part in the opening, to prepare us well for the play, and inform us that, since these are characters of a lower position, some of their jokes could be more coarse and vulgar, and prepares us for it. This can be seen in many areas, for instance, "What a plague", a slang, and "accost is, front her, board her, woo her, assail her", in this case, a sexual word play, directing towards Maria and Sir Andrew. ...read more.

The imagery also adds to the mood of sentimentality and romance, atmosphere of love and emotions. Thus, we are attracted by the use of language, the exaggeration of it, and drawn by the character Orsino, his infatuation toward Olivia, and we start to wonder, whether this unrequited 'love', or infatuation, would get any results, or end up to be anything good. Also, the similarities between Orsino and Olivia stirs up our interest and curiosity towards them, and we have an urge to know more about them, and learn more about how the plot slowly develops. From initially, we know that Orsino loves Olivia, but Olivia does not wish to show any affections for men at this moment, as she has lost both her father, and her brother, males who were her most loved ones. This is a development of the plot, and we slowly comprehend how the relationships between characters are, and their nature surfaces, and we grow to admire or dislike or like them. In scene 1, the conflict and struggle within Orsino himself is evident, as he feels strangled, tortured by this love, and wants the love to die so it would no longer torment him. We, however, pity him, as he believes himself to be really and totally in love with Olivia, when actually, he is more in love with himself and the idea of love. We sympathise with him, but at the same moment, cannot seem to convince ourselves, that Orsino is a gullible and blind lover. This is shown from how can clearly say that "O spirit of love, how quick and fresh art thou", yet not be able to realize that his own love for Olivia is merely an infatuation, and at any point of time, could just die, and disappear, within the snap of a finger. From this, we are further indulged in Twelfth Night, as our interest towards the plot and characters grow. The use of word play in scene 1, "hart" and "heart", adds to the wit and comical display of the play and arouses our interest. ...read more.