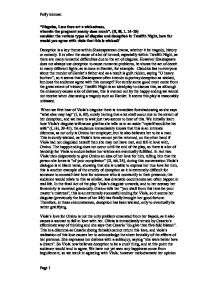 Twelfth night - would you agree with Viola that the use of disguise and deception is wicked?

"Disguise, I see thou art a wickedness, wherein the pregnant enemy does much". (II, iii, 1. 24-25) consider the various types of disguise and deception in Twelfth Night, how far would you agree with viola that this is wicked? Deception is a key theme within Shakespearean drama, whether it be tragedy, history or comedy. It is often the cause of a lot of turmoil, especially within Twelfth Night, as there are many romantic difficulties due to the art of disguise. However Shakespeare does not always use deception to cause romantic problems, he shows the act of deceit in many different lights, as is done in Hamlet, for example. Claudius lies to everyone about the murder of Hamlet's father and as a result is guilt ridden, saying "O heavy burthen", so it seems that Shakespeare often intends to portray deception as wicked, but does the audience agree with this concept? For surely some good must come from the great extent of trickery. Twelfth Night is an ideal play to discuss this, as although the chicanery causes a lot of distress, this is evened out by the happy ending we would not receive when discussing a tragedy such as Hamlet. It seems this play is reasonably unbiased. When we first hear of Viola's disguise there is immediate foreshadowing as she says "what else may hap" (I, ii, 60), surely hinting that a lot shall occur due to the extent of her deception, and we have to wait just two scenes to hear of this. ...read more.

However this accidental marriage turns out to be a happy one, as when Cesario is uncovered as Viola Olivia is grateful for the misunderstanding and, as far as we know, goes on to love her new husband Sebastian. This is a clear example of when deception is quite the opposite of wicked, as Olivia originally fell in love with Viola, who Sebastian (being her twin) is supposedly the male version of, and as Olivia does not think of herself as gay, this unlikely coincidence - brought upon by deception - is an extremely successful one. Maria instigates the manipulation of Malvolio through means of deception, and the consequences of this prove very wicked on his behalf. First, he humiliates himself in front of his colleagues. They watch on, making comments such as "fie on him, jezebel!" while he fantasises, with no clue that they are watching. This is surely wicked as Malvolio works himself into an emotional frenzy, causing himself to believe that he loves Olivia, and worst of all that she returns this love. The foolery doesn't stop here, as they take the chicanery as far as they possibly can before they are eventually caught out. Feste even chooses to ridicule Malvolio while he is imprisoned; deceiving him further still he says he is Sir Topaz. He attempts to convince Malvolio he is insane, saying "thou art more puzzled than the Egyptians in their fog". ...read more.

If Shakespeare intended for deception to be seen as a cruel thing, then it is doubtful that he would have made this a romantic comedy. For if he aimed for the audience to have such a pessimistic view on the play, he surely would have made it a tragedy, therefore making the effects of deception obviously bad. I do not think that Shakespeare intends for his audience to see deception as a wicked thing, therefore I do not think they do. Overall I would tend to agree with Viola that disguise is a wickedness, however I believe that Twelfth Night is an exception to this opinion, as although it did cause the characters a lot of grief, this concluded to be a very happy ending, typical of the plays genre. Also I can pick fault with Viola's opinion as she says that the disguise itself is a wickedness. I believe that it is not the disguise that is wicked but of course the nature in which it is used, in the circumstances of this play disguise is used to protect Viola and it is not intended to cause any harm. In my opinion this means that it is not wicked, however had she used deception with cruel intentions - much like Maria - then I would have to agree that it would be a wickedness. Some wickedness may have occurred due to beguilement, bit I think the audience would agree that overall, when referring to Twelfth Night, the act of disguise is not wicked. Polly kinnear. Page 1 ...read more.