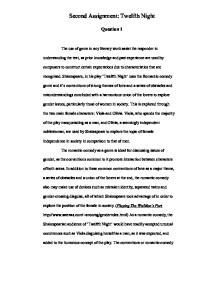 Second Assignment: Twelfth Night Question 1 The use of genre in any literary work assist the responder in understanding the text, as prior knowledge and past experience are used by composers to construct certain expectations due to characteristics that are recognised. Shakespeare, in his play 'Twelfth Night' uses the Romantic comedy genre and it's conventions of strong themes of love and a series of obstacles and misunderstandings concluded with a harmonious union of the lovers to explore gender issues, particularly those of women in society. This is explored through the two main female characters: Viola and Olivia. Viola, who spends the majority of the play masquerading as a man, and Olivia, a seemingly independent noblewoman, are used by Shakespeare to explore the topic of female independence in society in comparison to that of men. The romantic comedy as a genre is ideal for discussing issues of gender, as the conventions common to it promote interaction between characters of both sexes. In addition to these common conventions of love as a major theme, a series of obstacles and a union of the lovers at the end, the romantic comedy also may make use of devices such as mistaken identity, separated twins and gender-crossing disguise, all of which Shakespeare took advantage of in order to explore the position of the female in society. ...read more.

(II.iv 103-106) As Cesario, Viola is able to argue with Orsino, a liberty that would have been unacceptable for a woman to take. (Alternative Shakespeares- John Drakakis 186-187) Viola's inferiority as a woman is perhaps best exemplified throughout the play by the fact that when first presented to the audience, She is not named to the audience. They find out about her situation, but she remains anonymous until the final scenes of the play, when she is revealed to Orsino as a woman. When she is presented as Cesario, however, her character is immediately addressed by name, another example of male dominance and superiority in the play. (Playing the Wo/Man's Part: Gender Roles in Shakespeare http://www.satexas.com/~smootsg/genderroles.html) While seemingly more independent than Viola, Olivia, a woman of noble birth, and the original object of Orsino's affections, is also dependant on males, and does not have the freedom displayed by males. While she lives a seemingly independent lifestyle, which is unusual for a woman of the time, and is more forthright in expressing her opinion, she is not free from the influence of men. It is her devotion to mourning the loss of her dead brother that illustrates Olivia's dependence on males. ...read more.

Olivia too forfeits a significant part of her independence at the conclusion of the play. When she discovers that she has not, in fact, married Cesario, whom she loved, but in fact instead wed Viola's identical twin brother, a stranger, she chooses to remain married to him. This action accentuates the fact that marriage is of extreme importance in society. Also highlighted is the reality that Olivia's apparent 'independence' was only ever an illusion; she sought marriage and a male presence in her life so keenly that she consented to pursue a marriage to a stranger. (ClassicNote on Twelfth Night. http://www.gradesaver.com/ClassicNotes/Titles/twelfth/fullsumm.html.) Through Twelfth Night's female protagonists Viola, a woman shipwrecked who masquerades as a man to ensure her own survival, and Olivia, a noblewoman who presents a fa�ade of independence, both demonstrate throughout the play that the independence of the female characters is virtually nonexistent, when compared to their dominant, male counterparts. In order to effectively convey this injustice, Shakespeare makes use of the romantic comedy genre. The conventions of strong themes of love, a series of obstacles and a harmonious ending, all of which are features of the romantic comedy, combined with the audiences preconceived expectations of the genre create an ideal situation to explore the gender issues in Shakespearean society. ...read more.