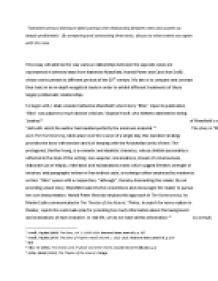 Twentieth century literature often portrays the relationship between men and women as deeply problematic. By comparing and contrasting three texts by Katherine Mansfield, Harold Pinter and Carol Ann Duffy, discuss to what extent you agree with this view.

﻿?Twentieth century literature often portrays the relationship between men and women as deeply problematic?. By comparing and contrasting three texts, discuss to what extent you agree with this view. This essay will address the way various relationships between the opposite sexes are represented in selected texts from Katherine Mansfield, Harold Pinter and Carol Ann Duffy, whose works pertain to different periods of the 20th century. My aim is to compare and contrast their texts in an in-depth exegetical study in order to exhibit different treatments of these largely problematic relationships. To begin with, I shall consider Katherine Mansfield?s short story ?Bliss?. Upon its publication, ?Bliss? was subject to much divisive criticism; Virginia Woolf, who hitherto admitted to being ?jealous?[1] of Mansfield?s writing, deemed it ?poor?[2] and ?cheap?[3], whilst T.S. Eliot praised the ?skill with which the author has handled perfectly the minimum material.?[4] The story in ?Bliss?, as in The Homecoming, takes place over the course of a single day; this narrative strategy provides the story with tension and is in keeping with the Aristotelian unity of time. The protagonist, Bertha Young, is a romantic and idealistic character, whose childish personality is reflected in the style of the writing: non-sequitur conversations, stream of consciousness, elaborate use of ellipsis, reiteration and exclamations marks which suggest Bertha?s strength of emotion, and paragraphs written in free indirect style, a technique often employed by modernist writers. ?Bliss? opens with a conjunction, ?although?, thereby disorienting the reader. By not providing a back story, Mansfield subverts the conventions and encourages the reader to pursue her own interpretation. Harold Pinter likewise employs this approach in The Homecoming. As Martin Esslin communicated in The Theater of the Absurd, ?Pinter, in search for more realism in theater, rejects the well-made play for providing too much information about the background and motivations of each character. In real life, we do not have all this information.?[5] As a result, the play?s earliest critics found it overly cryptic and failed in attributing a meaning or ...read more.

the same life marked by hopeless, incessant longing (?And after that, it seemed to me, they died as surely as Father was dead?[9]). ?The Daughters of the Late Colonel? could be viewed in light of Mansfield?s background. The theme of lost opportunities tragically pervades the play, and a reader?s knowledge of Mansfield?s death by consumption further enriches their perspective upon the reading. Furthermore, it has been suggested that Mansfield was sneering at the ?old tabbies? in ?Daughters of The Late Colonel?, but Mansfield herself denied it: ?It?s almost terrifying to be so misunderstood. There was a moment when I first had the idea when I saw the two sisters as amusing; but in the moment I looked deeper, I bowed down to the beauty that was hidden in their lives?[10]. The controlling behaviour of their father has as consequence the women?s excessive conformity, inability to think independently and repression of pleasures or desires. The title itself implies the daughters? sublimation and lack of autonomy, since they are referred to in relation to the colonel, and not as unique individuals. A tribute to both Shakespeare?s use of language and his love-making, ?Anne Hathaway? is a celebration of language as much as it is a celebration of the s****l act. Shakespeare himself was not oppressive towards women, quite the contrary, in his works the woman is generally depicted in an elevated, loving manner; this saves him from being a target of Duffy?s incisive lines. The poem uses a sensual treatment of language which emphasizes the similarity of the sensual delight found in the construction of a poem and the s****l act alike. It doesn?t slavishly follow the traditional sonnet form or even the sonnet argument form comprised of the counterparts of the octet and sextet. It uses a mixture of half-rhymes, full rhymes and blank verse, whilst the masculine, monosyllabic last line creates a sense of finality. ...read more.

?If the play is seen like a dreamlike myth [?] Ruth is a passive character, she is the object of male desires and, being an image in a dream, yields to these desires without putting up any resistance?[17]. The Homecoming, as an exemplar of the Absurdist Theatre, employs paralinguistic devices which possess the quality of being exceptionally powerful when performed. John Lahr wrote: "The Homecoming changed my life. Before the play, I thought words were just vessels of meaning; after it, I saw them as weapons of defense. Before, I thought theatre was about the spoken; after, I understood the eloquence of the unspoken. The position of a chair, the length of a pause, the choice of a gesture, I realized, could convey volumes."[18] The chair, for instance, is used as a territorial symbol of power; its function is rather like that of a throne, and as a result it comes into play in each of the characters? attempts to dominate and assert their status. Likewise, Ruth asserts her control over the physical space of the stage through walking with confidence and familiarity. The way she ?walks around the room? is contrasted with the special dynamics in ?Teddy walks about?, which reveal Teddy?s uncertainty. Harold Pinter?s play thus challenges the traditional views of language and communication, and provides a striking insight into the relationship between speech and silence, presence and absence, and the role of each antithetical part in the struggle for power and dominance, all taking place predominantly in the context of gender. In my essay I have primarily discussed the nature of the male-female relationships in the works of the three very distinguished authors Katherine Mansfield, Harold Pinter and Carol Ann Duffy. I aimed to focus chiefly on the intricacies of character, on the arguably flexible quality that describes most of the selected texts and which might allow for a large scope of different interpretations, and additionally on the influence of the context on the authors? work, along the road touching upon the techniques these skilled writers had employed in order to augment their artistic depictions. ...read more.