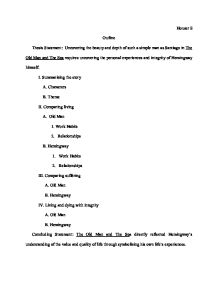 Uncovering the beauty and depth of such a simple man as Santiago in The Old Man and The Sea requires uncovering the personal experiences and integrity of Hemingway himself.

Houser ii Outline Thesis Statement: Uncovering the beauty and depth of such a simple man as Santiago in The Old Man and The Sea requires uncovering the personal experiences and integrity of Hemingway himself. I. Summarizing the story A. Characters B. Theme II. Comparing living A. Old Man 1. Work Habits 2. Relationships B. Hemingway 1. Work Habits 2. Relationships III. Comparing suffering A. Old Man B. Hemingway IV. Living and dying with integrity A. Old Man B. Hemingway Concluding Statement: The Old Man and The Sea directly reflected Hemingway's understanding of the value and quality of life through symbolizing his own life's experiences. Houser 1 Old Man: Santiago or Hemingway Two old men, one a poor fisherman, the other a wealthy writer, both are seemingly at opposite ends of society. Santiago, the poor fisherman with his simple life could not begin to imagine Hemingway's successful career as a writer. So how could a successful writer as Hemingway write a story about the life of a simple fisherman? Hemingway gave life to Santiago and when his book was published in 1952, it was an instant classic. Hemingway described the old fisherman's struggles, relationships, and beliefs with the passion of a poor man. ...read more.

The love and support from the boy, helps Santiago though his rough times at sea. The Old Man and The Sea was Hemingway's last big catch of his career before he died. Hemingway's work habits were that of a striving poor fisherman. He submerged himself in his writings with his emotions always in the forefront. Old man Hemingway compares himself to the old fisherman in that he too carried dignity and honor throughout the lack of respect from the critics. Although Hemingway in his later years, was having trouble writing, and the critics were having a good laugh at him, with his loved ones support he was able to put together one of his greatest novels. Whether a poor old fisherman skillfully catching a huge fish or a wealthy writer finishing a successful novel, the determination, rewards, and benefits can be equally the same. Hemingway had a deep heart and only felt close to a few people. Many people resented Hemingway because of where he had came from, his writing style, and the way he lived his life. The other fishermen in his story represented Hemingway's critics, as well as the boy represented his own support system that helped him focus on his book. ...read more.

He lived life hard, and to the fullest. When he couldn't live without constant suffering he took his life. Hemingway died with his integrity. As Hemingway's health started failing in his later years he started having trouble writing he knew he wanted to make one last mark on the literary world. He understood the meaning of life and mostly the quality of living. He wanted to put an experience into words. That experience would be not so much Santiago's personal experience, but Hemingway's life experience. The book would be short and sweet, just like his life. He would only reveal a tiny bit of information, leaving the reader to uncover the hidden meanings. Hemingway compared his life to Santiago, someone completely different than him, in all aspects of life, and with this he wanted to convey a deep message to the readers. "Just as every word in the book is there for a purpose, so is Santiago's every act" (Wagner 276). He wanted to show that outer success is only temporary, and inside everyone is the same, experiencing the same kind of life's disappointments and successes. The Old Man and The Sea directly reflected Hemingway's understanding of the value and quality of life through symbolizing his own life's experiences. ...read more.