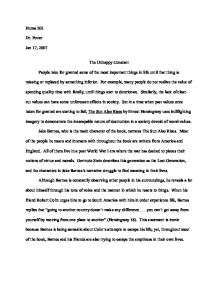 Huma 202 Dr. Potter Jan 17, 2007 The Unhappy Constant People take for granted some of the most important things in life until that thing is missing or replaced by something inferior. For example, many people do not realize the value of spending quality time with family, until things start to deteriorate. Similarly, the lack of clear-cut values can have some unforeseen effects in society. Set in a time when past values once taken for granted are starting to fail, The Sun Also Rises by Ernest Hemingway uses bullfighting imagery to demonstrate the inescapable nature of destruction in a society devoid of moral values. Jake Barnes, who is the main character of the book, narrates The Sun Also Rises. Most of the people he meets and interacts with throughout the book are writers from America and England. All of them live in a post World War I era where the war has dashed to pieces their notions of virtue and morals. Gertrude Stein describes this generation as the Lost Generation, and the characters in Jake Barnes's narrative struggle to find meaning in their lives. Although Barnes is constantly observing other people in his surroundings, he reveals a lot about himself through his tone of voice and the manner in which he reacts to things. ...read more.

Joseph DeFalco describes bullfighting in Hemingway's books as "not a sport in the Anglo-Saxon sense of the word, that is, it is not an equal contest or an attempt at an equal contest . . . [but] a tragedy; the death of the bull, which is played" (DeFalco 56). This describes perfectly Brett's role as a matador who plays men with her seduction. While Brett causes much of the destruction in Barnes's life, Barns also has a vicious cycle of "emotional self-mutilation" (Djos 117). Instead of damaging others in his fight to survive, Barnes harms mostly himself, discounting "his own worth and his right to any substantive fulfillment or happiness" (Djos 117). By putting himself in such a state of hopelessness, he is able resign himself to circumstances and accepts the condition of his relationship with Brett. In order to maintain this state of resignation, Barns needs to resort to drinking and meaningless partying. During the fiesta, Barnes notes, "everything became quite unreal finally and it seemed as though nothing could have any consequences. It seemed out of place to think of consequences during the fiesta." (Hemingway 142). In this state of suspended moral responsibility, morality for Barnes simply means avoiding "things that made you disgusted afterward" (Hemingway 137). Not thinking much about consequences, Barnes ends up arranging for Brett to meet with a bullfighter named Romero, knowing Brett will try to sleep with Romero. ...read more.

The admiration for bullfighters is similar to the admiration men show towards Brett despite her obviously manipulative nature. Men like Cohn are desperately in love with her throughout most of the book. At one point, Barnes talks spitefully of Brett in front of Cohn and Cohn is immediately offended and orders Barnes to "take it back" (Hemingway 42). When asked about bullfighting Hemingway once replied, "I feel very fine while it is going on and have a feeling of life and death and immortality, and after it is over I feel very sad but very fine" (DeFalco 58). In Hemingway's mind, bull fighting is artistic, but it also saddens him. Following the parallelism between bullfighters and the characters in the novel, the destructive actions of the characters are not commendable, but it is also an unavoidable tragedy. The traditional values are now dead, but Hemingway has come to terms with the fact that the true nature of life involves destruction In Hemingway's view of the world, destruction is now an inseparable part of a society that has lost its values. Everyone must fight as a bullfighter would in order to survive. People once told with clarity which values to live by have suddenly lost their clarity. The world is an unpredictable place where things once thought to be true can change in an instant. Perhaps it is important then, to be mindful of things taken for granted so that sudden losses will not be as devastating. ...read more.