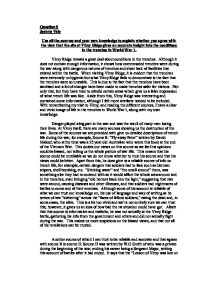 Use all the sources and your own knowledge to explain whether you agree with the view that the site at Vimy Ridge gives an accurate insight into the conditions in the trenches in World War 1.

Question 5 Joanne Vale Use all the sources and your own knowledge to explain whether you agree with the view that the site at Vimy Ridge gives an accurate insight into the conditions in the trenches in World War 1. Vimy Ridge reveals a great deal about conditions in the trenches. Although it does not contain enough information, it shows how overcrowded trenches were during the war along with dangerous natures of trenches and sheer lack of facilities that existed within the battle. When visiting Vimy Ridge, it is evident that the trenches were extremely unhygienic but what Vimy Ridge fails to demonstrate is the fact that the trenches were so unstable. This is due to the fact that the trenches have been sanitised and a lot of changes have been made to make trenches safer for visitors. Not only that, but they have tried to rebuild certain areas which give us a false impression of what trench life was like. Aside from this, Vimy Ridge was interesting and contained some information, although I felt more artefacts needed to be included. With remembering my visit to Vimy, and reading the different sources, I have a clear and vivid image of life in the trenches in World War 1, along with my own knowledge. ...read more.

This makes us more suspicious on the biased views, and that not all of his revelations can be trusted. Another source of which I can trust to be reliable and accurate and that agrees with source B is source D. Source D was written by W.G Smith of who was a private during the beginning of the war, ending his career being a Sergeant Major, writing this account of battles after it had ended. It says that the "Lesson of Vimy was lost on the high command". This gives us the impression that he blames the death of soldiers and the cost of lives and money on the government, due to their lack of caring and support for those at war. It also speaks of the artillery "smashing" the country so badly they lost communication with the forward areas. He also believes and writes that it was a "Senseless action whose aftermath ruined Britain so that to this day she has never recovered". Although this can be looked upon as a useless quote, I feel that this is probably the most vivid quote as it gives such a vivid image of how Britain and peoples lives were damaged and that through the hard bombing and shelling, the country (including men and women alike) ...read more.

I feel this may have been the worst part of the war: the waiting. But to conclude, I feel that neither Vimy Ridge nor the sources are better in giving information on the battle of Vimy. Both are reliable but at the same time not entirely accurate. On one hand Vimy is excellent as you can see where soldiers fought for their country and people, and walk around trenches, (although they have been rebuilt, you can still get an idea and feeling on what it was like). However, these rebuilt trenches were not realistic enough and did not give enough information. This could be misleading to those wanting to learn about the war. The same goes for the sources. On one hand they are informative on the battle overall, giving us detailed accounts of trench life, battles and the aftermath. Although some of the trench accounts are more vivid and realistic, giving us more of an idea of trench life, we are not entirely sure if they are trustworthy (as source A backs this. It was an incorrect drawing to persuade more men to fight). Due to this, both sources and the Vimy Ridge site together are brilliant sources into the life of soldiers during the war and how trench life affected them. ...read more.