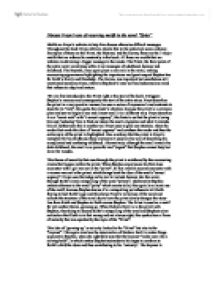 Use Of Recurring Motifs In &quot;Spies&quot; By Michael Frayn

Discuss Frayn's use of recurring motifs in the novel "Spies" Motifs are Frayn's vehicles to help him discuss otherwise difficult messages. Throughout the book Frayn refers to objects that to the naked eye seem ordinary. Examples of these are the Privet, the Bayonet, and the Germs; these are the 3 major motifs that are referred to constantly in the book. All these are motifs that are vehicles in delivering a bigger message to the reader. The Privet, the focal point of the entire novel conveying within it are messages of adulthood, humour and childhood. The Bayonet, once again plays a core role in the novel, making reoccurring appearances highlighting the importance and great respect Stephen has for Keith's family and friendship. The Germs, less important but nonetheless still mentioned numerous times, refers to Stephens's inner self and subconscious mind that refuses to adapt and mature. We are first introduced to the Privet right at the start of the book. It triggers Stephen's memory and consequently the start of the entire story. ...read more.

The Privet is used as a motif for yet another theme, growing up. When Barbara Berill is in the privet with Stephen, they being to discuss Keith's misspelling of the word and Stephens slow realisation that Keith is in fact wrong and not always right, this symbolizes a flame of maturity that was sparked by the topic of the "Privet". This idea of 'growing up' is not only limited to the "Privet" but also to the "bayonet". This again involves the intervention of Barbara Berill to make things apparent to Stephen, when she rightfully says that the bayonet "looks more like a carving knife", in which makes Stephen surrender to his urges to conform to Keith's childlike ideas and thus contributing to his 'maturity'. The bayonet is introduced to us as the "most secret and sacred possession... which killed 5 Germans", this is a very interesting introduction to the item, Frayn uses alliteration "secret and sacred" to draw emphasis on the great deal of importance this item has on both Stephen and Keith. ...read more.

This idea of the germs being Stephen's barrier to adulthood is reinforced when he sees Keith's mum fall into the germs. It is the first time Stephen seems an adult in such a vulnerable position, which frightens him. Consequently, having stumbled upon this theme, it becomes apparent that Frayn was in fact attempting to highlight it using other motifs. For example, when Stephen was in Aunt Dee's house and saw the photographs of Keith's mum and Aunt Dee together. Not only was it the moment that Stephen began to mature but also the moment where he realised that adults are in fact the same 'species' as children and can in fact be hurt. Other minor motifs include the tunnel which again depicts the idea of Stephen's passage to the outer and bigger world in which will help him mature and grow up, and one which he does not dare to enter. The cigarettes are again a metaphor for Stephen's journey into adulthood. One may even say the entire close is a representation of the entire world and the idea that nothing is what it seems but in fact has deep "metaphysical complexity". ...read more.