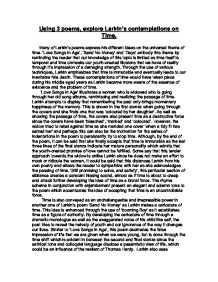 Using 3 poems, explore Larkin's contemplations on Time. Many of Larkin's poems express his different ideas on the universal theme of time. 'Love Songs in Age', 'Send No Money' and 'Days' embody this theme by reminding the reader that our knowledge of this topic is limited as time itself is temporal and time unmasks our youth-created illusions that we have of reality through it's impression of a damaging strength. Through the use of various techniques, Larkin emphasizes that time is immutable and eventually leads to our inevitable fate death. These contemplations of time would have taken place during his middle aged years as Larkin became more aware of the essence of existence and the problem of time. 'Love Songs in Age' illustrates a woman who is widowed who is going through her old song albums, reminiscing and realizing the passage of time. Larkin attempts to display that remembering the past only brings momentary happiness of the memory. ...read more.

This idea is enhanced through the use of 'booming Boy' as it establishes time as a figure of authority. By developing the caricature of time through a dramatic monologue as well as the exaggerated voice of his child like self, the poet tries to reveal the naivety of youth and our ignorance of the way it changes our lives. Similar to 'Love Songs in Age', this poem decimates the false impression of life that we are given when we were young, but is done through the time shift which is evident in between the second and final stanza since the satirical tone and colloquial language disclose a pessimistic view of life, which could be an influence of the realism of Thomas Hardy. Larkin also uses alliteration in the final two lines with the letter 't' which in turn could allude to the idea of shattering youth created illusions of life or the poet's frustration and anger with the way his life has turned out. ...read more.

This is also marked by the suddenness of 'Ah' of the second and final stanza. By bringing in the doctor and the priest with their 'long coats', the poet uses irony, because when we don't know what is happening to us, we go to them to find an answer as these are problems beyond our control seeing that it is further than our knowledge and understanding, yet the answer is also unknown to them. This develops the fact that time is unstoppable. In conclusion, these poems reveal Larkin's contemplations on time through two different styles; descriptive mediation and meditative discussion. Yet, both forms still determine that time is immutable and can ruin without one's acknowledgement. All three poems could be Larkin's attempt to lessen the pressure of time as they all try to identify the irrepressible power. This can be seen as his escape from the impact of time and to be free of the responsibilities it brings. ...read more.