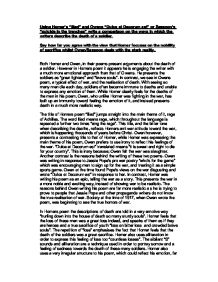 Using Homer's &quot;Iliad&quot; and Owens &quot;Dulce et Decorum est&quot; or Sassoon's &quot;suicide in the trenches&quot; write a comparison on the ways in which the writers describe the death of a soldier.

Using Homer's "Iliad" and Owens "Dulce et Decorum est" or Sassoon's "suicide in the trenches" write a comparison on the ways in which the writers describe the death of a soldier. Say how far you agree with the view that Homer focuses on the nobility of sacrifice whilst Owen/Sassoon deals with the stark reality. Both Homer and Owen, in their poems present arguments about the death of a soldier. However in Homers poem it appears he is engaging the writer with a much more emotional approach than that of Owens. He presents the soldiers as "great fighters" and "brave souls". In contrast, we see in Owens poem, a typical effect of war, and the realisation of death. With seeing so many men die each day, soldiers often became immune to deaths and unable to express any emotion of them. While Homer clearly feels for the deaths of the men in his poem, Owen, who unlike Homer was fighting in the war, has built up an immunity toward feeling the emotion of it, and instead presents death in a much more realistic way. The title of Homers poem "Iliad" jumps straight into the main theme of it, rage of Achilles. ...read more.

This description of death is more vivid and grotesque that that of Homer who simply describes it as "their bodies left to rot as feasts". Homer here uses a simile to show the comparison of how their bodies were left. This is similar to how Owen also uses a simile to describe the effect of the war on the troops "bent double like old beggars". Owen also uses one toward the end of the poem to show the effect of the gas on the man "obscene as cancer, bitter as cud". This double simile is a description of what happened to the man when he took in the gas and the substance that foamed out of his mouth is what is being described. Owen liked to use similes like this to emphasise the death of the soldier more so. The death of the soldier in Owens poem is taken as just another death as the body of the soldier is carelessly "behind the wagon that we flung him in". In the First World War, there were so many deaths that there was simply not enough time to build graves, and feel compassion for all of them. ...read more.

Homer instead uses language and words to add sorrow to sacrifice "immortal one" and "brave souls". By using words such as immortal and brave, Homer is giving the poem a much more sacrificial element, and again adds weight to the argument that he writes in a more emotive style. I believe that, Owens poem is showing the stark reality of the war. The fact that it is written in response to Jessie Pope to show her what the war is really like, also gives it more realistic properties. The death of the soldier, described by Owen shows how realistic the war is, especially when he is given no proper burial. Owen wanted to prove that war is not a game, and people die, which is not his idea of fun. At the end he uses the irony again to emphasise his point that propaganda is a cruel and twisted way of sending hundreds of men to their death. The death of the soldier in fact, is presented as realistic, throughout the poem we also see the effect of war, and what it does to the men "the men marched asleep". Owen is trying to show the people back home, how the war is not fun and games at all, it is murder and that's the stark realism of it. ...read more.