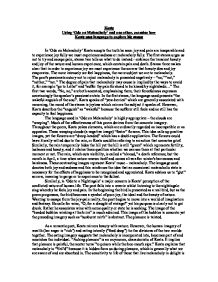 Using 'Ode on Melancholy' and one other, examine how Keats uses language to explore his muses

Keats Using 'Ode on Melancholy' and one other, examine how Keats uses language to explore his muses In 'Ode on Melancholy' Keats accepts the truth he sees: joy and pain are inseparable and to experience joy fully we must experience sadness or melancholy fully. The first stanza urges us not to try and escape pain; stanza two tells us what to do instead - embrace the transient beauty and joy of the nature and human experience, which contain pain and death. Stanza three makes clear that in order to experience joy we must experience the sorrow that beauty dies and joy evaporates. The more intensely we feel happiness, the more subject we are to melancholy. The poet's passionate outcry not to reject melancholy is presented negatively - "no," "not," "neither," "nor." The degree of pain that melancholy may cause is implied by the ways to avoid it, for example "go to Lethe" and "suffer thy pale forehead to be kissed by nightshade..." The first two words, "No, no," are both accented, emphasising them; their forcefulness expresses convincingly the speaker's passionate state. ...read more.

In the beginning the bird is presented as a real bird, but as the poem progresses, the bird becomes a symbol of pure joy, the ideal and the beauty of nature. Wanting to escape from the joy-pain reality, the poet begins to move into a world of imagination and fantasy. He calls for wine, "O, for a draught of vintage!" yet his purpose is clearly not to get drunk. Rather he associates wine with some quality or state he is seeking. The image of the "beaded bubbles winking at the brim" is much admired. This image of the bubbles is concrete yet the preceding imagery such as "sunburnt mirth" is abstract. The pleasure is tainted. As a romantic poet, Keats mirrors beauty with nature. However, the human imagery of wealth (her anger is "rich") and eating intently ("feed deep") tie the divisions of the two worlds together. The eating imagery suggests that melancholy is incorporated into, becomes part of and nourishes the individual. "Aching pleasure" is an oxymoron, characteristic of Keats. It implies that pleasure is painful, the nectar turns "to poison while the bee-mouth sips:" Keats explains that melancholy is "Veil'd" because it is hidden from us during pleasure, which is generally what we are aware of and are absorbed in. ...read more.

"Forlorn" and "perilous" would not ordinarily be associated with magic/enchantment. These words hint at the pain the poet recognised in the beginning of the poem and is trying to escape. The concept that in order to feel joy, we must also withstand pain is presented. Keats seems to recognise - through the bird's song - that feelings of joy are not everlasting; dying in the birds song would make him unable to hear it anymore and therefore feel anguish. In the end of 'Ode on Melancholy', we see the reward of the "wakeful anguish of the soul". The possessor of the wakeful soul "shall taste the sadness of her might". The change of tense from present pleasure to future melancholy expresses their relationship - one is part of and inevitably follows the other. Keats concludes that the wakeful soul will be the "trophy" gained from melancholy. However, the trophies are described as "cloudy," which has negative overtones keeping the muse of the poem constant throughout. Keats explores his muses using language of both happiness and despondency. Each of these feelings characterise the poems and therefore the use of imagery is relevant. The language used enables Keats to convey his emotions and experiences to the point where the reader can feel them too. ...read more.

This is a very knowledgeable, perceptive commentary, which refers frequently and accurately to both poems. It might have been interesting to have compared them more directly and address the importance of 'muses' more directly throughout the essay. ****

This is a strong essay with very good judgements and analysis and an excellent quality of writing, but would benefit from a stronger grasp of technical vocabulary. The student is right to refer to two poems - "Ode on Melancholy" ...

This is a strong essay with very good judgements and analysis and an excellent quality of writing, but would benefit from a stronger grasp of technical vocabulary. The student is right to refer to two poems - "Ode on Melancholy" must be used because it is named in the question, and by using it for roughly half of the essay, the student is showing they have enough knowledge about what they have been asked to stay on task. The student could improve by addressing the other part of the question - Keats' "muses" - in the introduction. It would be helpful to have a definition of "muses" because it would show that the student had enough knowledge and understanding to respond well to the question set, and it would also help to keep them on task because it would remind them to keep referring back to the idea of muses. Romantic poetry such as Keats' is famous for being full of deep expressions of emotion, and this clearly relates to the idea of a "muse" - a period of reflection.

It is crucial that the student addresses the part of the question that says "...how Keats uses language..." by analysing the techniques he uses. This is covered in the next section.

The student shows a good understanding of technical vocabulary by using terms such as "concrete imagery" and "change of tense", which shows they understand what Keats has used to craft the poem. By using specific technical vocabulary, the student is showing they have knowledge and understanding of terms specific to the study of literature, rather than using general words: it is better to do what this student does and use the specific term "imagery" than a general phrase that means the same, such as "Keats creates a picture in the author's mind". Although there is a limited consideration of grammar in the final paragraph, the student could improve on this by going beyond analysing words, as the requirement in the question for "language" could also cover the rhyme scheme. For example, the student could point out that each stanza begins with an ABAB rhyme scheme, which is traditional, but then becomes more unusual as the stanza goes on, which shows Keats' desire to experiment with his poetry. This would show an excellent understanding of language because it would demonstrate that the student can not only analyse single words, but also how those words fit together to make the poem.

The student is right to quote the text several times in the poem - such as "her anger is 'rich' " - because it shows that they are not just making statements they can't prove, but they are backing them up with evidence. When quoting individual words, it would be appropriate in an A Level essay to consider the connotations of the word (what a word suggests to the reader). For example, the student could have said: "The word 'rich' suggests her anger is strong and abundant", as this would improve the level of technical vocabulary in the essay. Some of the judgements the student makes are excellent, such as "The language used...is highly appropriate" then going on to explain why, which is good as it shows they are staying on the task of the question by evaluating language. Because the question does not have a statement to agree or disagree with, there is no need for a long conclusion, so the final sentence of this essay is sufficient as it shows that the student can look back over what they have written and summarise it.

The spelling, grammar and punctuation is excellent, if not perfect, which is good as it gives the essay the serious feel an academic piece should have, and avoids any confusion over what the student means. The student avoids saying things like "I think...", which is good as "I" makes the essay sound personalised and informal. However, the student frequently says things like "Keats speaks of...". Although technically it is Keats who wrote the words, he has essentially created a character (the narrator) to give the words to the reader, so it would be better to say "The narrator speaks of...". Not only would this be more accurate, but "narrator" is a good example of technical vocabulary, which would improve the overall analysis.