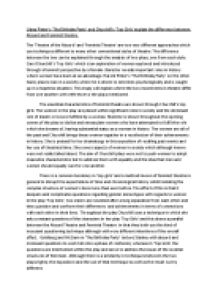 ﻿Using Pinter?s ?The Birthday Party? and Churchill?s ?Top Girls? explain the difference between Absurd and Feminist theatre. The ?Theatre of the Absurd? and ?Feminist Theatre? are two very different approaches which use techniques different to many other conventional styles of theatre. The difference between the two can be explained through the analysis of two plays, one from each style. Caryl Churchill?s ?Top Girls? which is an exploration of women explored and introduced through a feminist perspective by a female character reveals important roles in history where women have been at an advantage. Harold Pinter?s ?The Birthday Party? on the other hand, places man in a society where he is driven to extremes psychologically and is caught up in a hopeless situation. This essay will explain where the two movements in theatre differ from one another with reference to the plays mentioned. The essential characteristics of feminist theatre are shown through Churchill?s top girls. ...read more.

The effect of this is that it deepens and complicates questions regarding gender stereotypes with regards to women. In the play ?Top Girls?, two sisters are reunited after a long separation from each other and they question and confront their differences and achievements in terms of connections with each other in their lives. Throughout the play Churchill uses a technique in which she asks constant questions of the characters in her play ?Top Girls? and this draws a parallel between the Absurd Theatre and Feminist Theatre in that they both use this kind of incessant questioning technique although with very different intentions of the overall effect. Goldberg and McCann in ?The Birthday Party? torture Stanley with absurd and irrelevant questions to work him into a phase of confusion; whereas in ?Top Girls? the questions are intertwined within the play and serve to address the issues of the societal structures of feminism. ...read more.

He is forced to feel all the same emotions which he made Meg feel earlier on in the play. The questioning now has a purpose in the plot because now Goldberg and McCann representations of himself and in a sense teach him a lesson for his own behaviour and cruelty towards meg. The Oppression inflicted on Stanley now reveals the absurdity of the play with completely irrelevant and non-related witticisms alienating not only Stanley but also the audience too, as they will feel his emotions. Absurdist plays have a characteristic ability to disregard normal story telling methods and employ a more ambiguous approach in communication between characters. Through these plays it is possible to see a method of theatre through gender perspectives of a woman fighting against oppression of society and a man being dominated by it which in itself is absurd as it shines a new light on roles of masculinity for men and women. Absurdist plays often avoid discussion of human conditions and instead show it at an extreme level used to shock and discomfort the audience. ...read more.