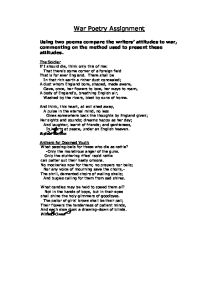 Using two poems compare the writers' attitudes to war, commenting on the method used to present these attitudes.

War Poetry Assignment Using two poems compare the writers' attitudes to war, commenting on the method used to present these attitudes. The Soldier If I should die, think only this of me: That there's some corner of a foreign field That is for ever England. There shall be In that rich earth a richer dust concealed; A dust whom England bore, shaped, made aware, Gave, once, her flowers to love, her ways to roam, A body of England's, breathing English air, Washed by the rivers, blest by suns of home. And think, this heart, all evil shed away, A pulse in the eternal mind, no less Gives somewhere back the thoughts by England given; Her sights and sounds; dreams happy as her day; And laughter, learnt of friends; and gentleness, In hearts at peace, under an English heaven. ...read more.

The language used was often based around classics, with references to chivalry and patriotism. Rupert Brooke, a Cambridge student, never actually saw the war in its true form. He died in 1915 of septicaemia on a hospital ship, he like many others died believing in the war. This is why his poem is upbeat and pro war and was cleverly used as propaganda. The true importance of the poem at the time was shown by the fact that the poem was read in St. Paul's cathedral in a sermon about preparing the nation for war. Such was the impact it had on the people listening; that the next day it was printed in The Times. The basic, overall purpose of 'The Soldier' was to encourage English people to sign up to fight in the war. ...read more.

Owen however twists this notion and shows that instead of this, the youth of Britain who are going out to battle in the trenches, are being led to their death and uses a religious and church theme to get the message across. Owen was amongst the second wave of war poets, whose poems were mostly hard-hitting, candid and shocking. The Soldier appeals directly to its reader. Brooke wants people only to think positively of his death, should it come to be. He tries to make people think of his death as a victory, where his body conquers the land where he died, making it become England. It also makes people believe that the same would apply their death if it were to happen to them. He describes his dead being as becoming "a richer dust" than that of the earth's, and personifies England as being his and every English person's mother with the metaphor "a dust whom England bore". ...read more.