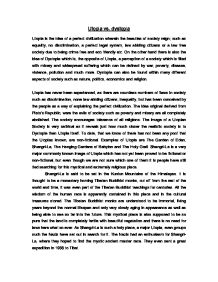 Utopia vs. dystopia Utopia is the idea of a perfect civilization wherein the beauties of society reign; such as equality, no discrimination, a perfect legal system, law abiding citizens or a law free society due to being crime free and eco friendly etc. On the other hand there is also the idea of Dystopia which is, the opposite of Utopia, a perception of a society which is filled with misery and widespread suffering which can be defined by war, poverty, disease, violence, pollution and much more. Dystopia can also be found within many different aspects of society such as nature, politics, economics and religion. Utopia has never been experienced, as there are countless numbers of flaws in society such as discrimination, none law abiding citizens, inequality, but has been conceived by the people as a way of explaining the perfect civilization. The idea original derived from Plato's Republic, were the evils of society such as poverty and misery are all completely abolished. ...read more.

This mystical place is also supposed to be so pure that the land is completely fertile with beautiful vegetation and there is no need for laws here what so ever. As Shangri-La is such a holy place, a major Utopia, even groups such the Nazis have set out in search for it. The Nazis had an enthusiasm for Shangri-La, where they hoped to find the mystic ancient master race. They even sent a great expedition in 1938 to Tibet. Dystopia though to be the opposite Utopia, but was derived from the idea of it. Though Utopia has never been proved to have been experienced, Dystopia has. Society believes that it is neither part of a Utopian Society or a Dystopian one. But if we look at what it is that makes up Dystopia, such as poverty, war, disease, discrimination and many more, then it can be understood that the human civilization experiences all of these factors. Therefore leaving it concluded that the world lived in is far from any ideal of perfection. ...read more.

Jews were the main target of this movement. In 1930�s plans to completely abolish and isolate Jews started with the construction of things such as labor camps and concentration camps. By 1939 over 200,000 Jews had left Germany. The n**i concentration camps housed the imprisoned Jews, where they were stripped of their clothes, starved and either shot to death, malnourished or put in the gas chambers were they were just left to die. All in all during this time period over six million Jews and other no-Aryans were systematically murdered. This is the perfect example of Dystopia, it created a war and used vast amounts of violence to produce major discrimination. To conclude Utopia and Dystopia may consist of entirely different things and ideals, but while trying to create a Utopian society, these people generally finish up with a major Dystopia. All in all it can be said that there is no way of creating Utopian society as when looking from a distance at the civilization taking place now is far from it and consists of all the items consistent for Dystopia. Utopia is therefore purely fictional and has so far been unable to be proved. ?? ?? ?? ?? ...read more.