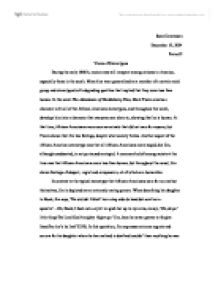 Views of stereotypes in The Adventures of Huckleberry Finn.

Sean Carstensen December 15, 2004 Period 3 Views of Stereotypes During the early 1800's, racism was still rampant among citizens in America, especially those in the south. Minorities were generalized as a member of a certain racial group and stereotyped with degrading qualities that implied that they were less than human. In the novel The Adventures of Huckleberry Finn, Mark Twain creates a character with all of the African-American stereotypes, and throughout the novel, develops him into a character that everyone can relate to, showing that he is human. At that time, African-Americans were seen as animals that did not care for anyone, but Twain shows that Jim has feelings, despite what society thinks. Another aspect of the African-American stereotype was that all African-Americans were stupid, but Jim, although uneducated, is not portrayed as stupid. A common belief among racists at the time was that African-Americans were less than human, but throughout the novel, Jim shows feelings of despair, regret and compassion, all of which are humanlike. In contrast to the typical stereotype that African-Americans care for no one but theirselves, Jim is depicted as an extremely caring person. ...read more.

African-Americans and slaves especially, were stereotyped as ignorant in the early 1800's. Jim, like most other slaves, has no formal education and talks in a dialect that makes him appear to be less educated. However Jim has a unique kind of intelligence. When Huck was trying to trick Jim into thinking that he had dreamt up their separation in the fog, Jim notices the debris on Huck, "Jim looked at the trash, and then looked at me, and back at the trash again. He had got the dream fixed so strong in his head that he couldn't seem to shake it loose and get the facts back into its place again right away. But when he did get the thing straightened around he looked at me steady without ever smiling" (54). Jim shows his common sense smarts by figuring out when Huck is lying to him. The fact that Huck, an educated white boy, couldn't fool Jim, an uneducated slave, with his scheme shows that although Jim is uneducated, he is intelligent in his own way. When the Duke and the King come on board the raft, Jim knows that since the King claims he is from France, that he should be able to speak French. ...read more.

He knows very well that he could easily be caught doing this and set back into slavery, but he does it anyway. This shows that Jim is a very humanlike character who experiences humanlike emotions, compassion in this instance, and acts in selfless ways. Twain again demonstrates Jim's equality and humanlike characteristics when Huck and Jim and eating on the raft. Huck writes, "so Jim he got out some corn-dodgers and buttermilk, and pork and cabbage and greens... and whilst I eat my supper we talked and had a good time" (126). This quotation illustrates Jim as an equal to Huck who can experience the same easy-going and fun emotions that Huck can. No where in the book is Jim unable to understand an emotion Huck or any other person is feeling, showing his humanity. Jim is a representation of how all people can feel emotions for others, be intelligent no matter how uneducated they are, and experience emotions of the human race. Mark Twain has succeeded in creating a character who although is a minority, embodies characteristics that people can relate to. The Adventures of Huckleberry Finn was an important statement against racism and the values taught can still be applies to the American culture today. ...read more.