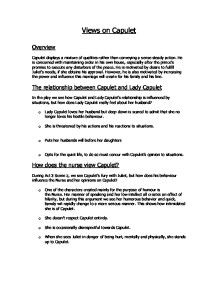 Views on Capulet Overview Capulet displays a mixture of qualities rather than conveying a sense steady action. He is concerned with maintaining order in his own house, especially after the prince's promise to execute any disturbers of the peace. He is motivated by desire to fulfill Juliet's needs, if she obtains his approval. However, he is also motivated by increasing the power and influence this marriage will create for his family and his line. The relationship between Capulet and Lady Capulet In the play we see how Capulet and Lady Capulet's relationship is influenced by situations, but how does Lady Capulet really feel about her husband? ...read more.

o One of the characters created mainly for the purpose of humour is the Nurse. Her manner of speaking and her low intellect all creates an effect of hilarity, but during this argument we see her humorous behavior and quick, bawdy wit rapidly change to a more serious manner. This shows how intimidated she is of Capulet. o She doesn't respect Capulet entirely. o She is occasionally disrespectful towards Capulet. o When she sees Juliet in danger of being hurt, mentally and physically, she stands up to Capulet. How does Juliet react to Capulet? How is this different form the way she reacted to her mother? ...read more.

o When talking with her mother, Juliet is more argumentative and shouts as she refuses to marry Paris, but when Capulet enters she speaks more softly and tries to be calm but Capulet refuses to believe what he is hearing and gets very irritated by this. Prince's views on Capulet Prince is a strong-minded individual but how is Capulet's behaviour affecting him? o He wants peace but is unable to provide this with the feud's carrying on. o He thinks Capulet is fickle o Views Capulet as petty and starts fights over anything o His Hatred for Capulet and Montague grows with each brawl o Prince thinks Capulet is hot-headed ...read more.