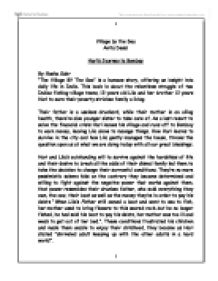 Village by the SeaAnita Desai Hari's Journey to Bombay

Village by the Sea Anita Desai Hari's Journey to Bombay By: Rasha Sakr "The Village BY The Sea" is a humane story, offering an insight into daily life in India. This book is about the relentless struggle of two Indian fishing-village teens, 13 years old Lila and her brother 12 years Hari to earn their poverty stricken family a living. Their father is a useless drunkard, while their mother is an ailing health, there're also younger sister to take care of. As a last resort to solve the financial crisis Hari leaves his village and runs off to Bombay to earn money, leaving Lila alone to manage things. How Hari learns to survive in the city and how Lila gently manages the house, throws the question upon us at what we are doing today with all our great blessings. Hari and Lila's outstanding will to survive against the hardships of life and their desire to break all the odds of their dismal family led them to take the decision to change their sorrowful conditions. They're no more pessimistic solemn kids on the contrary they became determined and willing to fight against the negative power that works against them, that power resembles their drunken father, who sold everything they own, the cow, their boat as well as the money they've in order to pay his debts "When Lila's Father still owned a boat and went to sea to fish, her mother ...read more.

He couldn't afford to buy his sisters "sweets" as he has "no money". This feeling towards his reckless father is quite obvious "May be a poisonous snake will bite him", then "he would die... he said it with hope", as he believes that his father is absolutely responsible for this kind of life he and his sisters are living in, "He doesn't look after us,Hari said spitting out the end of a very sharp chapatti, we look after ourselves, don't we?" He wishes to leave the village one day, he regards it as a prison that ties him, he never hides his feeling towards his village or his life saying "When he thought of all his troubles, his drunken father, Mr. De Silva's insult, the lake of work and money. Hari wished he too could soar up into the sky and disappear instead of being tied to the earth here". Hari dreamt of escaping from Thul. He has tried every possible opportunity there, he worked as a farmer, fisherman, coconut collector, and much more, he even served Mr. De Silva for few pennies. That sense of despair which overwhelmed Hari, never allowed him to feel the blessings that he has, this feeling which he started to realize after going to Bombay. Hari regarded Bombay as a land of dreams. He thought that his dreams could be attained there. ...read more.

It's this place that he belongs to not the city as he discovered that he doesn't want to be "a city boy". Hari now is a mature boy, a capable one, a boy who can change circumstances around him in order to live. He knows now that he can't "soar up into the sky" because "we are here on earth ,we can't leave it. We must live here somewhere". He is now able to cope with his new life and find himself a way out of poverty and starvation , he is as Mr. Sayyid Ali has described him "You are going to give up your traditional way of living and learn a new way to suit the new environment that the factory will create at Thul so as to survive. Yes, you will survive". This is true, Hari has learned how to survive and the credit is given to this journey and the people whom he met Mr. Panwallah and Jagu who taught him how to be practical and ambitious as well as confident. Finally, Anita Desai managed to create a fabulous picture of a devastated boy who has succeeded due to his strong will and determination to conquer the toughest possible situations and to get not only one but two jobs and many friends. ?? ?? ?? ?? 1 1 ...read more.