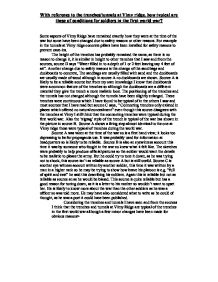 Some aspects of Vimy Ridge have remained exactly how they were at the time of the war but some have been changed due to safety reasons or other reasons. For example in the tunnels at Vimy ridge concrete pillars have been installed for safety reasons to prevent cave-ins. The height of the trenches has probably remained the same, as there is no reason to change it, it is similar in height to other trenches that I saw and from the sources, source D says "Water filled in to a depth of 1 or 2 feet leaving say 4 feet of air". Another change due to safety reasons is the change of the sand bags and duckboards to concrete, The sandbags are usually filled with sand and the duckboards are usually made of wood although in source A no duckboards are shown. ...read more.

Also the 'zigzag' style of the trench is typical of the war has shown in the picture in source B. Source A shows a firing step almost identical to the one at Vimy ridge these were typical of trenches during the world war. Source A was taken at the time of the war so is a first hand view; it looks too depressing to be for propaganda use. It was probably used for information at headquarters so is likely to be reliable. Source B is also an eyewitness account this time it was by someone who fought in the war so knew what it felt like. ...read more.

This source is quite reliable but has a good reason for toning down, as it is a letter to his mother so wouldn't want to upset her. He is likely to know more about the war than the other soldiers as he was a officer so was told more. He may have also considered what to write as he could of thought, as he was a poet it could have been published. Considering the trenches and tunnels I have seen and from the sources I think that the trenches and tunnels at Vimy Ridge are typical of the trenches in the first world war although a few minor changes have been made for obvious reasons> With reference to the trenches/tunnels at Vimy ridge, how typical are these of conditions for soldiers in the first world war? ...read more.