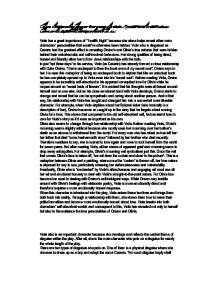 Viola has a great importance of &quot;Twelfth Night&quot; because she alone helps reveal other main characters' personalities that would've otherwise been hidden

Choose one important character from your extended text. You will write in detail about a character and explain his/her importance in the text. Viola has a great importance of "Twelfth Night" because she alone helps reveal other main characters' personalities that would've otherwise been hidden. Viola who is disguised as Cesario had the greatest effect in revealing Orsino's and Olivia's true natures that were hidden behind their melodramatic and self-involved behaviour. Her strong qualities of being direct, honest and friendly allow her to form close relationships with the both. In just "but three days" in his service, Viola (as Cesario) has already formed a close relationship with Duke Orsino. "I have unclasped to thee the book even of my secret soul", Orsino says to her. He uses this metaphor of being an unclasped book to explain that like an unlocked book he has completely opened up to Viola even into his "secret soul". Before meeting Viola, Orsino appears to be incredibly self-absorbed in his apparent unrequited love for Olivia while he mopes around on "sweet beds of flowers". ...read more.

But after meeting Viola, all her shows of apparent grief and mourning seem to drop away unforgotten. For example, Olivia's mourning veil symbolises just this. Once the veil that covers Olivia's face is taken off, "we will draw the curtain and show to the picture". This is a metaphor between Olivia and a painting, where once the "curtain" is thrown off, her true nature is exposed for any to see, particularly stressing her defencelessness and vulnerability. Eventually, Olivia who is "enchanted" by Viola's attractiveness and engaging wit must use all her wit and emotional honesty to deal with Viola's straight-to-the-point nature. For Olivia has become too used to dealing with Orsino's self-indulgent ways. While Orsino may twiddle around with Olivia's feelings with elaborate poetry, Viola is more emotionally direct and therefore requires a more emotionally honest response. When this character is introduced into the play, Viola enters these two lives and brings them both back into reality. Through a relationship with them, she shows them how to leave their polite formalities and become more emotionally honest about love. ...read more.

But in reality, the possibility of Orsino recognising her love is close to nothing and the formation of this love triangle (where Olivia is in love with Cesario i.e. Viola's disguise, Orsino is in love with Olivia and Viola is in love with Orsino) only increases the importance of disguising her love. These two disguises of this nature allows for many ironies in the play. For example, when Orsino asks if Viola (who is disguised as Cesario) is in love, Viola replies that she is in love with someone "of your complexion" and "about your years" which is undeniably true but very ironic considering she is not talking of another woman but hinting that she is in love with Orsino himself. Viola carries out the theme of disguise throughout most of the play. She reflects the theme of disguise because to everyone else in "Twelfth Night", she is known as Cesario (with exception to the audience) and she has to constantly keep her love for Orsino disguised. Although at various times her honesty lets her come close to revealing her real nature as a woman, her disguise still holds up until the appearance of her twin brother, Sebastian. ...read more.