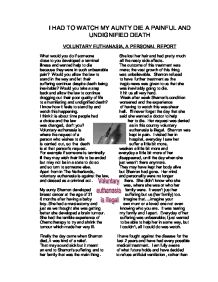 I HAD TO WATCH MY AUNTY DIE A PAINFUL AND UNDIGNIFIED DEATH VOLUNTARY EUTHANASIA, A PERSONAL REPORT What would you do if someone She lost her hair and had pretty much close to you developed a terminal all the nasty side affects. illness and wanted help to die The outcome of this treatment was because they were in such unbearable mere; the vast growth of this thing pain? Would you allow the law to was unbelievable. Sharron refused stand in the way and let their to have further treatment as the suffering continue despite death being tragic news was given to us that she inevitable? Would you take a step was inevitably going to die. back and allow the law to continue It hit us all very hard. dragging out their poor quality of life Week after week Sharron's condition to a humiliating and undignified death? worsened and the experience I know how it feels to stand by and of having to watch this was shear watch this happening. h**l. I'll never forget the day that she I think it is about time people had said she wanted a doctor to help a choice and the law her to die. ...read more.

more, it wasn't until then that I realised the arguments involved. People against She wrote these words before she died: voluntary euthanasia argue that it is murder as you are killing someone, they "I am only 43 years old. I desperately argue that elderly people may feel a want a doctor to help me to die. burden to their family so opt for voluntary Motor neurone disease has left euthanasia. They think that my mind as sharp as ever but terminally ill people may not be it has gradually destroyed my in a fit state of mind to make the muscles, making it hard for me decision and that it gives to communicate with my too much power to doctors. family. It has left me in a wheelchair Another argument against it is that the catheterised and fed through a tube. family may not agree with the decision and suffer because of it, it also exposes vulnerable people to pressure to end Families of a terminally ill loved one their lives. Religious people argue that may disagree with their decision it is playing God (he gave us life, only to opt for voluntary euthanasia he should be able to take it away). ...read more.

People may argue that it should not be legalised as it is wasting life or going against the Hippocratic Oath 81% of the public think that a person who is suffering unbearably from a terminal illness should be allowed by law to receive medical help to die, if that is what he or she wants. NOP public opinion poll 28 October 2002 An opinion poll by the Nursing Times found that 60% of nurses believed the law should be reformed. 40% said they had given painkillers to dying patients knowing it would hasten their deaths. A third said they personally wanted to be allowed to help assisted suicides. If you support voluntary euthanasia, a dignified death, then go to my website www.justice.co.uk and register your opinion. As a country we WILL change the law and get justice for Diane Pretty and bring the pain and suffering of others to an end. VES promotes greater patient choice at the end of life. They campaign for people with terminal illnesses to be allowed to ask for medical help to die at a time of their choosing, within proper legal safeguards. VES receives many calls from people who are very ill and think they may want help to die. If you want any help or information on voluntary euthanasia you can contact VES through their website www.ves.org.uk ...read more.