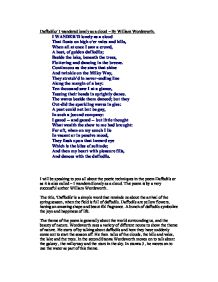 Daffodils/ I wandered lonely as a cloud - By William Wordsworth. I WANDER'D lonely as a cloud That floats on high o'er vales and hills, When all at once I saw a crowd, A host, of golden daffodils; Beside the lake, beneath the trees, Fluttering and dancing in the breeze. Continuous as the stars that shine And twinkle on the Milky Way, They stretch'd in never-ending line Along the margin of a bay: Ten thousand saw I at a glance, Tossing their heads in sprightly dance. The waves beside them danced; but they Out-did the sparkling waves in glee: A poet could not but be gay, In such a jocund company: I gazed -- and gazed -- but little thought What wealth the show to me had brought: For oft, when on my couch I lie In vacant or in pensive mood, They flash upon that inward eye Which is the bliss of solitude; And then my heart with pleasure fills, And dances with the daffodils. I will be speaking to you all about the poetic techniques in the poem Daffodils or as it is also called - I wandered lonely as a cloud. ...read more.

Wordsworth structures the content of the poem by focusing the first three stanzas on the experience at the lake and the last stanza on the memory of that experience. In the first 3 stanzas line 3 is indented. Perhaps it is trying to illustrate a picture in our minds of the movement of the things being described and tries to give a sense of movement. For example, Wordsworth talks about the daffodils fluttering and dancing in the breeze, and the stars twinkling on the milky way which gives a sense of motion and action . In contrast, the 4th stanza has a different layout with most of the lines equal. This gives a sense of calmness and relaxation to describe how he is lying down thinking about what he has just experienced. I have noticed that lines 1 and 2 is talking about the same thing, but just split up in to 2 lines. This also occurs with lines 3 and 4, and 5 and 6. Therefore there is no comma after the first line as it is continued to the next line. ...read more.

It can pass by unnoticed, touching nothing. Also, the image of a cloud brings to mind a light, sort of wandering. Wordsworth uses another simile, saying the dancing of daffodils in the wind is "continuous as the stars that shine and twinkle on the Milky Way." This line creates the image of the wind blowing the tops of random daffodils up and down. This goes along with the next metaphor of the daffodils "tossing their heads in sprightly dance." Comparing their movement to a dance also makes me think of swirling, swishing yellow skirts moving in harmony. There is a strong use of personification, where the author writes, Fluttering and dancing in the breeze. Clearly Daffodils don't dance, however the author of the poem is trying to compare it to what a person would do. Although the line 'Tossing their heads in sprightly dance.' is a simile, it could also be classed as personification. Although Daffodils may move in the wind, they could not toss their heads in sprightly dance, like any flower that can't. Repetition is used frequently in the poem. An example of this technique is I gazed -- and gazed where the word gazed is used repeatedly emphasize that he gazed. ...read more.