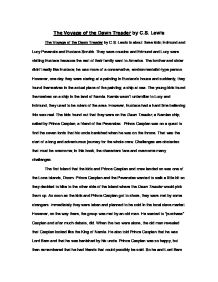 Voyage of the Dawn Treader C&amp;C

The Voyage of the Dawn Treader by C.S. Lewis The Voyage of the Dawn Treader by C.S. Lewis is about three kids; Edmund and Lucy Pevensie and Eustace Scrubb. They were cousins and Edmund and Lucy were visiting Eustace because the rest of their family went to America. The brother and sister didn't really like Eustace; he was more of a conservative, environmentalist-type person. However, one day they were staring at a painting in Eustace's house and suddenly, they found themselves in the actual place of the painting; a ship at sea. The young kids found themselves on a ship in the land of Narnia. Narnia wasn't unfamiliar to Lucy and Edmund, they used to be rulers of the area. However, Eustace had a hard time believing this was real. The kids found out that they were on the Dawn Treader, a Narnian ship, sailed by Prince Caspian; a friend of the Pevensies. Prince Caspian was on a quest to find the seven lords that his uncle banished when he was on the throne. ...read more.

(Lewis 59) Eventually, Caspian relieves Gumpas of his office and then makes Lord Bern the Duke of the Lone Islands. As soon as that happens, Duke Bern makes a law that there will be no slaves or slavery in effect. The children and some of the crew of the Dawn Treader were then saved by almost being sold in the slave market. The voyagers faced a huge challenge of being enslaved, however, with the cunning and smarts of Prince Caspian; they got over the obstacle and got back to their journey to find the other Lords. Eustace Scrubb was a very anti-social kid. He didn't really like having company nor did he have friends. He wasn't really close to his parents either and that was why he didn't really like Lucy and Edmund. They had most of the things that he wanted. He was also very hardheaded and didn't really believe in things that weren't "normal." When the crew first set sail, Eustace was still very hesitant and had a hard time believe the whole situation was real. ...read more.

"We've been waiting for ever so long for a nice little girl from foreign parts, like it might be you, Missie-that would go upstairs and go to the magic book and find the spell that takes off the invisibleness, and say it..." (Lewis 151) Lucy was pretty scared in doing the deed, but eventually she pulled herself to do it. The challenge of facing her fear and helping the invisible creatures to become visible again was a true test of her fear. She faced an obstacle that was hard to go through, but she eventually got through that and said the spell to make the creatures visible again. There are many challenges the adventurers face throughout the whole book. That is why I recommend this book to people who like adventures. I also recommend it to people who liked the other books in the series of the Chronicles of Narnia. In the end of this book, the members of the Dawn Treader find all of the seven lords Prince Caspian's uncle banished. Finding the seven lords and being able to return to Narnia, above all, was the true obstacle, and the characters in this book overcame it. ...read more.