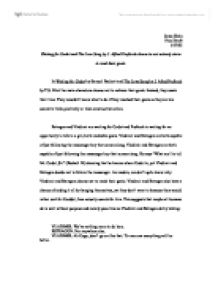 Waiting for God and The Love Song by J. Alfred Prufrock choose to not actively strive to read their goals.

ESTRAGON: That's the idea, let's make a little conversation. VLADIMIR: Haven't they? ESTRAGON: What? VLADIMIR: Changed. ESTRAGON: Very likely. They all change. Only we can't. VLADIMIR: Likely! It's certain. Didn't you see them? ESTRAGON: I suppose I did. But I don't know them. VLADIMIR: Yes you do know them. ESTRAGON: No I don't. VLADIMIR: We know them, I tell you. You forget everything. Unless they're not the same... (Beckett 52). This also shows that they are living very meaningless lives, because if Estragon can't even remember what happened the day before it shows that it didn't mean too much, because if it was meaningful anyone could remember it. They also think very negatively of themselves saying that they will never change, which is strange because everything changes. They also talk about death but they don't think that's the ultimate solution VLADIMIR: We'll hang ourselves to-morrow. Unless Godot comes. ESTRAGON: And if he comes? VLADIMIR: We'll be saved. (Beckett 109) And prefer waiting for Godot. In Acts I + II the same people talk to them, Pozzo andLucky and the messenger boy, yet Estragon doesn't remember anything and they would rather wait than change the lives they have "VLADIMIR: Well? ...read more.

and Prufrock says, "I do not think that they will sing to me" (line 125) but the mermaids sing to everyone else. Prufrock and Vladimir and Estragon don't reach their goals, but they seem to still have good spirits. Since no one is there to help them Prufrock or Vladimir and don't go anywhere and don't take a step towards their goals. Instead the only thing they really can do is wait. Prufrock has tea parties while thinking about the girl, just waiting time, and Vladimir and Estragon go to the same spot day after day, the messenger comes by and so do Pozzo and Lucky yet Vladimir and continue to think about death and wait for Godot. Prufrock and Vladimir and Estragon in The Love Song for J. Alfred Prufrock and Waiting for Godot have chosen their passive, pointless lives and they lack the courage and intellegence to change them. Their lives are based on a goal, yet this goal will never be achieved. They have a reason to get up every morning, their lives are based on waiting for on goal and they have no desire to change their passive lives. They are achieving their goals in life by just simply WAITING. ...read more.