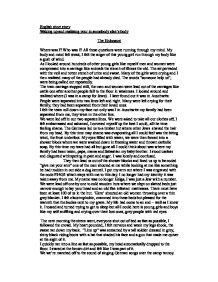 Waking up and realizing your in somebody else's body - The Holocaust.

English short story Waking up and realizing your in somebody else's body The Holocaust Where was I? Who was I? All these questions were running through my mind. My body and mind felt weak, I felt the anger of this young girl run through my body like a gush of wind. As I looked around hundreds of other young girls like myself men and women were compressed into a carriage like animals the stench of illness the old. The air pervaded with the veil and rotten stench of urine and sweat. Many of the girls were crying and I then realized many of the people had already died. The words "someone help us", were being called out repeatedly. The train carriage stopped still, the men and women were lead out of the carriages like cattle one after another people fell to the floor in weakness. I looked around and realized where (I was in a camp for Jews) . I later found out it was in Auschwitz. People were separated into two lines left and right. ...read more.

There must have been at least 100 of us in the hut. 'Here' shouted an old women throwing over a thin grey blanket. I felt claustrophobic, crammed into these beds but pleased for the warmth that the bodies next to my grave. My life had come to an end - well as I knew it. I tossed and turned trying to get to sleep but all I could here is young girls and boys like my self sniffling and crying over their lost ones, grey people with red eyes. The next morning the sirens went, everyone shot out of bed as fast as possible, I followed the crowd. My heart pounded, I felt nervous and week my legs shook, the sweat ran down my back. "Line up" was screamed by a tall soldier dressed in grey, shiny black riding boots with a hat that shaded his face and a gun that made me quiver at the sight of it. I quickly ran into a line as fast as possible, my head automatically dropped to the floor. ...read more.

I found out later this was only part of the horrific tale. The other side of the camp the Germans marched my people into oblivion - the cyclone gas taking the lives of women and children, my mother, my farther and the baby, Sebastian. Poor Sebastian to young to have sinned, too young to appreciate his lose of life. The day the Russian came two years later with freedom and food I felt to weak to be joyful, to hungry to eat. I took me some weeks to start to appreciate that I was one of the lucky ones. The Germans had killed 6 million Jews by brothers my sisters. Do I hate? Yes, time has passed the history books blame the Nazis, but what of the society that let it happen who allowed the monster to take them to war and butcher the innocent. The white tunnel of light sped past me I can to a shuddering halt. I could hear the doctors shouting get the drip in, get hold of the next of kin. I knew I was going to be fine - Helga told me not to worry my life was far from over. ...read more.