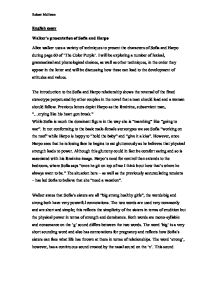 Walker's presentation of Sofia and Harpo.

English essay Walker's presentation of Sofia and Harpo Alice walker uses a variety of techniques to present the characters of Sofia and Harpo during page 60 of 'The Color Purple'. I will be exploring a number of lexical, grammatical and phonological choices, as well as other techniques, in the order they appear in the letter and will be discussing how these can lead to the development of attitudes and values. The introduction to the Sofia and Harpo relationship shows the reversal of the fixed stereotype perpetuated by other couples in the novel that a man should lead and a woman should follow. Previous letters depict Harpo as the feminine, subservient man, "...crying like his heart gon break." While Sofia is much the dominant figure in the way she is "marching" like "going to war". In not conforming to the basic male-female stereotypes we see Sofia "working on the roof" while Harpo is happy to "hold the baby" and "give it a kiss". However, once Harpo sees that he is losing face he begins to eat gluttonously as he believes that physical strength leads to power. Although this gluttony could in fact be comfort eating and so is associated with his feminine image. ...read more.

The rocking chair could symbolise she has learnt that obtaining the image and role of a male does not help in relationships with other men. The word 'rocking' suggests that a relationship in which wood is present in both persons will never succeed. Taking wood away from Harpo could mean that Sofia wants Harpo to become more of a man and Sofia wants him to succeed in a stereotypical relationship. Walker then ends the list and states that Sofia is also taking "the children". The fact that this is a simple sentence consisting of just two words gives it a very sudden feel to it. It's a huge impact both to the reader and to the relationship between Sofia and Harpo. Harpo has lost the children even though he, due to the role reversal, was very much the mother to them. This highlights the painful feelings that Harpo must be going through to lose his children. The subsequent sentence illustrates Harpo's attitude towards Sofia as she is leaving. "Harpo sit on the steps acting like he don't care." The last three words 'he don't care' contain only one syllable and demonstrate Harpo's apathetic feelings towards the situation. The words 'sit on the steps' are also mono-syllabic and have a plosive edge created by the 't' sound and also the 'p' sound in the word 'step'. ...read more.

On the words 'little' and 'whistle' they both end in the letters 'tle', making them rhyme and chime (like a tune) and create a feeling as if they're fading away. Walker mentions that Harpo's whistle is lost in a jar, a jar being transparent and suggests that you can see through Harpo as he wants to be like all the other males. However, the glass can be broken and Harpo's real side can be seen, his whistle returns and he regains his confidence. But be careful, as once the glass is broken, the shards can inflict pain. The jar is then lost down a creek which signifies that it cannot be returned without great effort and reflects that Harpo has to try and strive to succeed. A lot can be discovered about the attitudes and values of Sofia and Harpo from looking at the first two paragraphs. Deep down Sofia loves Harpo and a great effort is needed for her to leave. Sofia wants to leave most of the past behind but takes a few important items to signify change both for her and for Harpo. Harpo must be stricken with pain at the sight of losing his children as he was very much the mother figure. However, Harpo contains all his feeling inside and tries to carry on with his life. Robert McEwan ...read more.

Some good close analysis of language which leads to mature and perceptive comments. However some analysis and comments are unconvincing particularly when not supported by textual references.