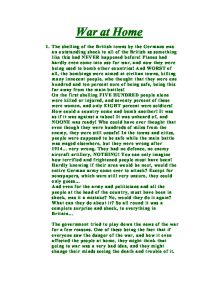 War at Home 1. The shelling of the British towns by the Germans was an outstanding shock to all of the British as something like this had NEVER happened before! Planes had hardly even come into use for war, and now they were being used to bomb other countries! And WORST of all, the bombings were aimed at civilian towns, killing many innocent people, who thought that they were one hundred and ten percent sure of being safe, being this far away from the main battles! On the first shelling FIVE HUNDRED people alone were killed or injured, and seventy percent of these were women, and only EIGHT percent were soldiers! How could a country come and bomb another! It was as if it was against a taboo! It was unheard of, and NOONE was ready! Who could have ever thought that even though they were hundreds of miles from the enemy, they were still unsafe! In the towns and cities, people were supposed to be safe while the main battle was waged elsewhere, but they were wrong after 1914... very wrong. They had no defence, no enemy aircraft artillery, NOTHING! You can only imagine how terrified and frightened people must have been! Hardly knowing if their area would be next, would the entire German army come over to attack? Except for newspapers, which were still very unsure, they could only guess... ...read more.

But there was not a lot of sugar in Britain, and most of the ships that carried the masses of sugar, and maybe fish, would scarcely actually reach Britain, as the Germans would usually stop them, and would cut off the lines of import and export from Britain and to Britain! So this would mean that there would be hardly any sugar and therefore the prices would rise! 3. Pictures H and J differ in the ways as H, mainly looks at fathers, and family men going to their was, as it even says "Daddy, what did YOU do in the Great War?" and as it shows his two children around him, it means that all fathers should go and fight for their country and their families, to make their family and children proud and to prove themselves! But J however says "WOMEN of BRITAN SAY - GO!" So I think that this poster would aim more towards boyfriends, lovers or husbands, as you always, stereotypically, see the brave soldier going to fight for his lover, to keep her safe from the enemy, and to come back and 'rescue' her, or that the men might think that the women like men that go to war, so this poster would encourage that though, and would maybe make them think something like "Oh yeah! If I go to war I'll be a hero! ...read more.

And these false ideas did actually work, and many unsure minds were changed and they also went to war, also this was helped after the bombing of London and British towns, as the people would have more of a reason to hate and destroy the Germans! (Also there was the plan of dishonouring people through a white feather being placed on the men that did not fight!) So the government was safe... for a short while! But the final stage was the worst, now two things had happened, worse was that most of the men that had gone to war were already dead or injured and there was a shortage of them. And secondly now men at home realised HOW bad war was, and they were not so ignorant of what was happening most men said no to war! So now the government laid down their worst card yet... CONSCRIPTION! Men of age between 18 and 45 were FORCED to go to war, except for the very seldom few, that were conscientious objectors, that got away with it! But no men had to, whether they liked it or not, go to war! But the government, although it was very bad and horrific, maybe had to play this final trump card, a double edged sword is a good phrase for it as it is just that... But yes, they did need to introduce conscription or we may have lost the war without the manpower and in fact probably would have... Abbas Lightwalla ...read more.