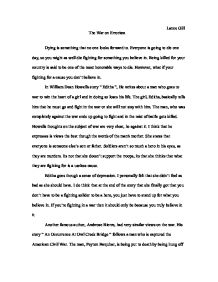 The War on Errorism

Dying is something that no one looks forward to. Everyone is going to die one day, so you might as well die fighting for something you believe in. Being killed for your country is said to be one of the most honorable ways to die. However, what if your fighting for a cause you don’t believe in.

In William Dean Howells story “ Editha ”, He writes about a man who goes to war to win the heart of a girl and in doing so loses his life. The girl, Editha, basically tells him that he must go and fight in the war or she will not stay with him. The man, who was completely against the war ends up going to fight and in the mist of battle gets killed. Howells thoughts on the subject of war are very clear, he against it. I think that he expresses is views the best though the words of the man's mother. She states that everyone is someone else’s son or father. Soldiers aren’t so much a hero in his eyes, as they are murders. Its not that she doesn’t support the troops, its that she thinks that what they are fighting for is a useless cause.

Editha goes though a sense of depression. I personally felt that she didn’t feel as bad as she should have. I do think that at the end of the story that she finally got that you don’t have to be a fighting solider to be a hero, you just have to stand up for what you believe in. If you’re fighting in a war then it should only be because you truly believe in it.

Another famous author, Ambrose Bierce, had very similar views on the war. His story “ An Occurrence At Owl Creek Bridge “ follows a man who is captured the American Civil War. The man, Peyton Farquhar, is being put to death by being hung off the bridge. When he is hanged, the rope breaks. Peyton falls into the water, escapes his executioners through hails of gun and cannon fire, and makes his way down the river and through a forest, attempting to reach his home. During his journey through the night, he starts to experience strange events and believes he has lost consciousness. Finally, he wakes up to see his home with his waiting there to greet him. While running forward to reach her when he suddenly feels a pain in his neck. At that moment to realize that Peyton never escaped at all, he imagined all of entire events of the story during the time between beings pushed off the bridge and having the noose break his neck.

I think that Bierce’s idea behind the story was, during the time of war what a solider wants more than anything is the opportunity to get a second chance and stay home with their family instead of fighting in a war that they don’t believe in. They want the chance to go home to their families and live their life the way that they want to. Another thought is that no matter what the war is being fought over, it’s a lose lose situation. Soldiers are forced to go over, risk everything that they have, kill people in the same boat that they are in, and come home worse off, or possibly not come home at all.

There are many different ways you can look at what was written and put it into your own opinions. The one fact that you can gather from these writings is that the writers were against the war. They believe that you must do what your heart tells you, listen to it and go forward from there.