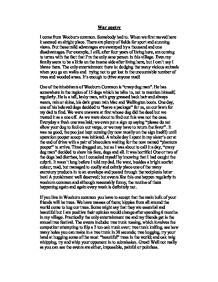 War poetry I come from Wooburn common. Somebody had to. When we first moved here it seemed an alright place. There are plenty of fields for sport and stunning views. But these mild advantages are swamped by a thousand and one disadvantages. For example, I still, after four years of living here, am coming to terms with the fact that I'm the only sane person in this village. Even my family seem to be a little on the insane side after living here, but I can't say I blame them. The only entertainment there is: dodging the many vicious animals when you go on walks and trying not to get lost in the uncountable number of trees and wooded areas. It's enough to drive anyone mad! One of the inhabitants of Wooburn Common is "crazy dog man". He has somewhere in the region of 15 dogs which he talks to, not to mention himself, regularly. He is a tall, lanky man, with grey greased back hair and always wears, rain or shine, his dark green rain Mac and Wellington boots. One day, one of his beloved dogs decided to "leave a package" for us, on our lawn for my dad to find. We were unaware at first whose dog did the deed but we treated it as a one off. As we were about to find out this was not the case. ...read more.

In Wooburn Common you might be surprised to know that there is a gulf course. Well, when I say gulf course, I actually mean a quagmire with poles stuck in the ground every now and again. The aim of the game, in general, is not to get stuck in the mud indefinitely, or get hospitalized by one of the many animals that inhabit the gulf course! One of the first tasks you have to accomplish is the deadly morass. This lengthy, how can I put it nicely, mud puddle, stretches for almost 3 holes and has consumed many thousands balls in its time and only god knows how many Wooburn Commoners! The next obstacles that you have to face are the rabbits. The rabbits are very much a carbon copy of the inhabitants of Wooburn Common. They're crazy. When you enter this section, in which they inhabit you find that they run at full speed in what ever direction they wish; left, right, at the tree, at you! So apart from the normal muddy conditions to deal with, you have to fight off insane rabbits coming at you from all directions. By this time you've given up all hope of actually playing a round of gulf and concentrate more on your very much dwindling life-span. ...read more.

doesn't sound too good, does it!? War is an ever-continuing incidence that has played a role in history and, even in this civilized modern day, still does play a role in history. It is a universal incidence that affects not only the soldiers fighting in the war, but the families at home, the neighboring countries and other people that rely on countries for trade. It affects all ages too; from war veterans to young children that will grow up, learning of massacres and slaughters. Perhaps one of the reasons it has been so widely covered and explored is the emotion that transpires from us when hearing of huge numbers dead, or children losing limbs in civilian bombing. And because of this world wide interest, it is no surprise that it has been recorded for many years. Information in medieval times and before was no doubt handed on by oral tradition, but as times advanced; poetry was written about war; news papers began to write articles; and all sorts of media have continued to inform. This essay is focusing on war poetry and its traditions through different times (i.e. 15th Century through to the First World War). I shall, by contrasting and comparing a selection of war poems, consider the ways in which attitudes to war have been explored and expressed. ...read more.