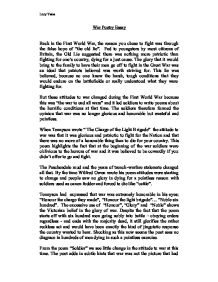 War Poetry Essay Back in the First World War, the reason you chose to fight was through the false hope of "the old lie". Fed to youngsters by most citizens of Britain, the Old Lie suggested there was nothing more patriotic than fighting for one's country, dying for a just cause. The glory that it would bring to the family to have their men go off to fight in the Great War was an ideal that patriots believed was worth striving for. This lie was believed, because no one knew the harsh, tough conditions that they would endure on the battlefields or really understood what they were fighting for. But these attitudes to war changed during the First World War because this was "the war to end all wars" and it led soldiers to write poems about the horrific conditions at that time. The soldiers therefore formed the opinion that war was no longer glorious and honorable but wasteful and pointless. When Tennyson wrote " The Charge of the Light Brigade" the attitude to war was that it was glorious and patriotic to fight for the Nation and that there was no more of a honorable thing than to die for your country. This poem highlights the fact that at the beginning of the war soldiers were oblivious to the horrors of war and it was believed to be cowardly if you didn't offer to go and fight. ...read more.

At this point the Old Lie still holds. In contrast to these previous feelings about war, Wilfred Owen portrayed it in a completely different way. However he didn't always have such a biased opinion of war. At the beginning he too fell for the Old Lie - "Dolce et Decorum est Pro Patria Mori". The poem "Dolce et Decorum Est" is a complete contradiction to the title. It means sweet and glorious but it expresses the real side of war, rather than "the old lie" fed to the soldiers as they prepare for war. The poem has an upsetting nature and uses very graphic imagery; "He plunges at me guttering, choking, drowning". This descriptive use of onomatopoeia adjectives places disturbing images in the mind of the reader. "Gargling from froth-corrupted lungs": the soldiers are choking and foaming at the mouth as they die: we can hear the sounds. The reality of the poem tells it as it was, nothing patriotic but only "desperate glory". The pace of the poem is quick and shows the desperation and the form of the poem - the three eight-line stanzas rhyming ABABCDCD - draws the reader into the horrific reality like a mini-thriller, everything is rushed, almost blurred, but still so clear in everlasting memory. "In all my dreams before my helpless sight". ...read more.

And we see through its elegiac imagery Owen's major theme shining through: pity. Owen said: "My poetry is about war, the pity of war. And the poetry is in the pity". Like a lone Highland Piper, this poem is a lament showing the powerlessness of humanity in the face of inhumanity. Through these poems it can be seen that the attitudes to war have moved on. From the heady patriotic fervour of glory and honour to seeing that there is truly, surely, no point in thousands dying for futile causes. Tennyson represented the view of a patriot who was honoured to fight for his country and believed glory would prevail. Rupert Brooke was prepared to continue this theme, whereas Owen represented the view of finding no point or meaning to war. Although the people back home ignored the horrors of war, they wanted to believe that their men were heroes bringing glory and honour to the family name and the Nation. Owen felt that it was his duty, through his poetry and its graphic and accurate imagery of the awful conflict, to change hearts and eventually to change minds. These poems will forever stay a record of changing attitudes to war which enforced different opinions. But they also act as a key-hole to give us a historical insight into life, and death, on the poppy-fields that became the wretched battle grounds of the "war to end all wars". ?? ?? ?? ?? Lucy Yates ...read more.