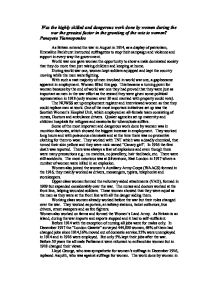 Was the highly skilled and dangerous work done by women during the war the greatest factor in the granting of the vote to women?

Was the highly skilled and dangerous work done by women during the war the greatest factor in the granting of the vote to women? Panayota Yiannopoulos As Britain entered the war in August in 1914, as a display of patriotism, Emmaline Pankhurst instructed suffragettes to stop their campaign and violence and support in every way the government. World war one gave woman the opportunity to show a male dominated society that they do more than just raising children and keeping at home. During world war one, women kept soldiers equipped and kept the country moving while the men were fighting. With such a vast majority of men involved in world war one, a gap became apparent in employment. Woman filled this gap. This became a turning point for woman because by the end of world war one they had proved that they were just as important as men in the war effort as the reward they were given some political representation in 1918 (only woman over 30 and married with property could vote). ...read more.

In 1916 the first death was reported. There was always a fear of explosions and even though there were many precautions e.g.: no matches, no jewellery, hair tied back, etc. There were still accidents. The most notorious was at Silverstone, East London in 1917 where a number of women were killed in an explosion. Women also joined the women's Auxiliary Army Corps (WAACS) formed in the 1916, they mainly worked as drivers, messengers, typists, telephonist and storekeepers. Upper class women formed the voluntary aided attachments (VAD), formed in 1909 but expanded considerably over the war. The nurses and doctors worked at the front line, helping wounded soldiers. These women showed that they were equal as the men as they were at the front line with all the danger aiding them. Working class women already worked before the war but their roles changed over the war. ...read more.

During the fight for suffrage, men used a quote from Queen Victoria against the suffrage fighters. At this time she was the most famous woman and she did not agree with enfranchising women. She said: "Let women be what God intended, a helpmate for man, but with totally different duties and vocation." By the end of the war they had proven to the male dominated parliament that they were just as worthy as men were for the right to vote. As a reward for their war efforts they were given some political representation. The war was the biggest factor in granting women their suffrage, because this was their time to prove to the nation that they could do men's jobs and be their equal. The war work they did flawed all arguments against them having a right to vote and so the war was a turning point in women's suffrage. This was there time to shine and they did! ...read more.