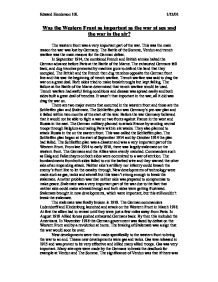 Was the Western Front as important as the war at sea and the war in the air?

Was the Western Front as important as the war at sea and the war in the air? The western front was a very important part of the war. This was the main reason the war was lost by Germany. The Battle of the Somme, Verdun and trench warfare was the main reasons for the German defeat. In September 1914, the combined French and British armies halted the German advance before Paris at the Battle of the Marne. The exhausted Germans fell back, and dug trenches protected by machine guns to defend the land that they occupied. The British and the French then dug trenches opposite the German front line and this was the beginning of trench warfare. Trench warfare was said to drag the war on a great deal. Both sides tried to make breakthroughs but kept failing. The failure at the Battle of the Marne determined that trench warfare would be used. Trench warfare had awful living conditions and disease was spread easily and both sides built a great deal of trenches. It wasn't that important in the war, all it did was drag the war on. ...read more.

The German commanders Ludendorff and Hindenburg launched and attack on the Western Front in March 1918. At first the allies had to retreat until they were just a few miles away from Paris. In August 1918 Allied forces pushed exhausted Germans back. By then this included the Americans. In November 1918 the German government was faced by defeat on the Western Front and by a revolution at home. The braking of Stalemate was a sign that the war would soon be over. New developments were then made specifically to the western front to bring the war to an end. Theses new developments were gas and tanks. Gas was released in 1915 and was proven to be very effective and killed many allied troops. Gas was very important. Many attempts were made by the Germans to break the deadlock for example at Verdun and The Somme. The significance of Verdun was that if there was to be a breakthrough it would be on the western front and this would be by wearing down the enemy with offensive after offensive. This was called a war of attrition. ...read more.

Reconnaissance (Used by British planes) was used at the Somme to give information about the bombardment of the trenches. Without reconnaissance the bombardment would have never been possible. If the war at sea and the war in the air had never happened the western front would not be as important as it is. Therefore, in my final conclusion I feel that all three fronts were linked together. The blockade was one of the main reasons the war ended and this was the war at sea. Reconnaissance gave information on the bombardment of the Somme and this was a main battle at the Western Front. The war at sea was the most important factor due to the blockade. The blockade-stopped supplies coming into Germany, the German moral went down and the conditions of German people were awful and many people began to die. At the time though people thought that the Western Front was the most important factor but they did not think about the other two factors. Without the war at sea and the war in the air the Western Front would not be important at all. The Western Front was more important than the war in the air but not as important as the war at sea. Edward Henderson 10L 1/12/01 ...read more.