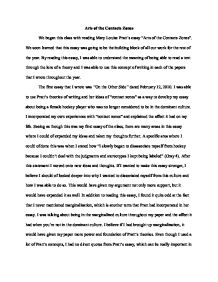 We began this class with reading Mary Louise Pratts essay Arts of the Contacts Zones.By reading this essay, I was able to understand the meaning of being able to read a text through the lens of a theory and I was able to use this con

Arts of the Contacts Zones We began this class with reading Mary Louise Pratt's essay "Arts of the Contacts Zones". We soon learned that this essay was going to be the building block of all our work for the rest of the year. By reading this essay, I was able to understand the meaning of being able to read a text through the lens of a theory and I was able to use this concept of writing in each of the papers that I wrote throughout the year. The first essay that I wrote was "On the Other Side" dated February 12, 2010. I was able to use Pratt's theories of writing and her ideas of "contact zones" as a way to develop my essay about being a female hockey player who was no longer considered to be in the dominant culture. I incorporated my own experiences with "contact zones" and explained the affect it had on my life. Seeing as though this was my first essay of the class, there are many areas in this essay where I could of expanded my ideas and taken my thoughts further. ...read more.

Simpson. I was able to incorporate a lot of DuCille's concepts like "browning" and the "Mandingo Syndrome" into my paper to support my claims as well as incorporating quotes from Othello. I noticed that I used a lot more evidence from the reading than I did in my previous paper. The transition between paragraph to paragraph seemed to flow much better and not be as choppy. In every ending sentence of each paragraph, I incorporated that idea into the beginning sentence of my new paragraphs. An example of this is when I began a paragraph explaining what exactly the O.J. Simpson trial was after I had just ended the previous paragraph with "In her essay, DuCille examines what effects interracial relationships have on the people involved and relates it to the O.J. Simpson Trial" (Gray 2). Even though I found many strong areas, there were still areas that seemed weak. As I read over this essay, I realized that I struggled with doing deep analysis and found myself almost summarizing at times. An area where I found myself summarizing is when I talk about the play Othello and seemed to be retelling the plot of the play instead of analyzing why each incident occurred. ...read more.

By using novels like Tortilla Curtain and Reservation Blues, I was able to compare these novels and show how they are both parallel with each other in showing the struggle the marginalized cultures has due to the dominant cultures. In the essays I have written this year, I presented many arguments that mainly had to do the "marginalized society" and the "contact zones" they are involved in by looking at them in alternative viewpoints. I have seen my progression as a writer from being able to not just summarize my ideas anymore, but deeply analyze them. I also seemed to gain strength in my ability to support my arguments by using quotes and concepts from the the texts I have read. Even with all this progression as a writer, I still see areas I need to work in like my ability to produce a counter argument, which is what I struggled greatly with in my research paper. I see my work as part of an academic project, since I am able to see the progression I have been making in this project as well as be able to see the areas I can still work on in the future. ?? ?? ?? ?? ...read more.