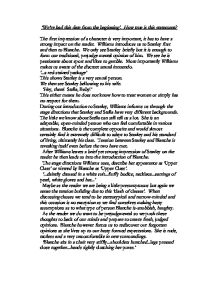 'We've had this date from the beginning'. How true is this statement? In A Street Car named desire.

'We've had this date from the beginning'. How true is this statement? The first impression of a character is very important, it has to have a strong impact on the reader. Williams introduces us to Stanley first and then to Blanche. We only see Stanley briefly but it is enough to form our traditional, prejudge mental opinion of him. We see he is passionate about sport and likes to gamble. More importantly Williams makes us aware of the discreet s****l innuendo. '...a red-stained package' This shows Stanley is a very s****l person. We then see Stanley bellowing to his wife. 'Hey, there! Stella, Baby!' This either means he does not know how to treat women or simply has no respect for them. During out introduction to Stanley, Williams informs us through the stage directions that Stanley and Stella have very different backgrounds. The little we know about Stella can still tell us a lot. She is an adaptable, open-minded person who can feel comfortable in various situations. Blanche is the complete opposite and would almost certainly find it extremely difficult to adapt to Stanley and his standard of living, ultimately his class. ...read more.

'She sprays herself with her atomizer: then playfully sprays him with it. He seizes the atomizer and slams it down on the dresser.' It is not just Stanley who receives such special treatment. It seems mostly all of the male characters in the play have been subjected to Blanche's flirtatious nature. 'She looks after him with certain interest' This shows what an addictive person she can be. Her deceitfulness is evident in every scene and it seems as though Blanche is living in a fantasy world that she has developed over time. Stanley may not be intelligent or educated like Blanche but he is bright. Blanche predictably underestimates Stanley. She thinks that because he is of a lower class he must be stupid but he is far from it. He is rightfully cautious and suspicious of Blanche from the beginning. 'Don't play so dumb. You know what! -Where's the papers?' Blanche's deceitful nature and Stanley's distrust towards Blanche add the inevitability of a final confrontation. On numerous occasions throughout the play Blanche insults Stanley to his face but mostly and more importantly, behind his back. ...read more.

'Queen of the Nile! Sitting on your throne and swilling down my liquor!' Revealing Blanche's past is not what is important to Stanley any more revenge is. Stanley has an amazing yet intimidating physical presence and makes a point off making Blanche aware of it. 'Don't come on here!' We feel sympathy and fear for Blanche as Stanley follows her into the bedroom. But it is too late for Blanche, Stanley wants his settle the scores. 'Come to think of it-maybe you wouldn't be bad to interfere with...' r**e is a cruel and malicious act that no person deserves but it seems as though Blanche ahs lead herself to her own destruction through her feeling of superiority over Stanley, constant insults, flirtatiousness and addiction to deceit. This situation could be non-existent had Blanche never called Stanley a Polack right at the beginning of the play. If only she had been accepting of those different from her. Unfortunately Stanley and Blanche have had this date from the beginning, from the moment they met to the moment he rapes her. I believe it as all been like a first date, the nervous introduction, flirting, finding out about each other, the s****l tension. Stanley has treated it like a date from the beginning. Regrettably for Blanche a date with Stanley will always end with s*x. ...read more.