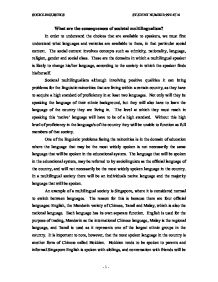 What are the consequences of societal multilingualism?

What are the consequences of societal multilingualism? In order to understand the choices that are available to speakers, we must first understand what languages and varieties are available to them, in that particular social context. The social context involves concepts such as ethnicity, nationality, language, religion, gender and social class. These are the domains in which a multilingual speaker is likely to change his/her language, according to the society in which the speaker finds his/herself. Societal multilingualism although involving positive qualities it can bring problems for the linguistic minorities that are living within a certain country, as they have to acquire a high standard of proficiency in at least two languages. Not only will they be speaking the language of their ethnic background, but they will also have to learn the language of the country they are living in. The level at which they must reach in speaking this 'native' language will have to be of a high standard. Without this high level of proficiency in the language/s of the country they will be unable to function as full members of that society. One of the linguistic problems facing the minorities is in the domain of education where the language that may be the most widely spoken is not necessarily the same language that will be spoken in the educational system. ...read more.

Code switching, is a consequence of bilingualism or more generally multilingualism. A choice that is made between languages, when they speak more than one, according to the circumstances in which they find themselves. In view of this there are certain factors which must be taken into consideration, the first being whether the language will be comprehensible to the person being addressed. Speakers will, generally speaking, choose a language that the other person can understand. In societal multilingualism the different languages are always used in different circumstances, and the choice that they make is always controlled by social rules. Typically one language is reserved for use at home and another is used in a wider community. One language will have a certain social function that another language would be unable to fulfil; each language will represent certain social distinctions. The choice of language will define and redefine the situation; this is referred to as metaphorical code switching. This may change, between formal to informal, official to personal, serious to humorous and politeness to solidarity. This form of code switching is referred to as metaphorical code switching, and is concerned with the various effects that the speaker intends to convey while communicating. ...read more.

and Guarani is the L variety (i.e. Instructions to workers in low prestige occupations). The H variety is the prestige variety and is the taught variety, and the L variety is the learned variety. Although a bilingual or multilingual society has the capability of creating positive effects, such as allowing communication to occur with a minority percentage of the population. This situation is still capable of creating a negative effect, such as a loss of language, in particular amongst the immigrants. The immigrant will be forced into speaking the official language of the country on a more regular basis, and will begin to speak his/hers native language on a much less frequent basis. A multilingual society may also lead to a sort of diffusion; certain features will spread from one language to another, as a result of the multilingual situation, particularly in the area of where syntactic features will diffuse. A multilingual society may also create a degree of confusion amongst the speakers when they are not fully aware of the community norms, and the particular functions of the language in relation to the way the society functions. The most positive effect societal multilingualism creates is communication between the society as a whole, whether the person that an individual is speaking to is familiar or unfamiliar. This is proved in the case of Singapore, where numerous languages are used in a numerous different circumstances. ...read more.