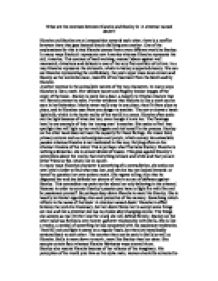 What are the contrasts between Stanley and Blanche in &quot;A Streetcar named Desire&quot;?

What are the contrasts between Blanche and Stanley in 'A streetcar named desire'? Blanche and Stanley are at juxtaposition towards each other, there is a conflict between them that goes beyond simply disliking one another. One of the explanations for this is that Blanche comes from a very different world to Stanley. In many ways Stanley's represents new America whereas Blanche represents the old, America. This contrast of hard working, manual labour against well mannered, chivalrous and delicate is one of the very first conflicts of culture. In a way Blanche represents the old south, which in history supported slavery. We can see Blanche representing the confederacy, the posh upper class slave owners and Stanley as the would-be slave, resentful of his treatment from the South and by Blanche. Another contrast is the animalistic natures of the two characters. In many ways Blanche is like a moth. Her delicate nature and fragility invoke images of the cover of the book. Stanley is more like a bear, a heavily territorial creature that will fiercely protect its mate. Further evidence that Blanche is like a moth can be seen in her behaviour. ...read more.

She regrets telling Alan that he disgusted her and she defends her picture of him in an act of defiance against Stanley. This contradicts my point earlier about her only believing in the ethereal. Because in order to counter Stanley's passion you have to fight fire with fire and be passionate yourself. So perhaps deep down Blanche is more like Stanley. She is heavily territorial regarding Alan and protective of his memory. Something which reflects in the name of the book 'A streetcar named desire' Blanche in effect believes the world is illusionary, but her desire forces her to accept some things are real and like a streetcar she has no choice abut changing course. The things she accepts as real [IE Her love for Alan] she will defend fiercely. Stanley on the other hand has formed a very hunter-gatherer relationship with Stella. She is like a trophy, a symbol of something he has conquered with his passionate tendencies. They fall out and fight it seems on a regular basis, but they are inexplicably attracted back to each other. ...read more.

Quite clearly Blanche has not got quite a sound mind, because it seems to fabricate reality to what suits her. She still believes she is a lady of upper-class nature, but she has essentially tainted herself through her activities at the flamingo. She bathes a lot, and this frustrates Stanley. He works in the grease and muck and does not see it necessary to clean himself as often as Blanche, and yet she washes herself constantly. Blanche characteristically dresses in white, the purest form of light. When she bathes she is cleansing herself. I think that she might be trying to cleanse the blood of her dead husband from herself. Stanley does not seem to have been through the emotional trauma that she has, and so cannot understand how she feels. When you murder someone, directly or otherwise, it sticks in your mind and Blanche has convinced herself of her responsibility towards his death. In summer then, Blanche shares a few passionate similarities with Stanley. Her perception of reality is similar to Stanley's when it comes to love. However she surrounds herself with the false and the fake, to comfort herself and to try and cleanse her body of the taint that surrounds it. ...read more.