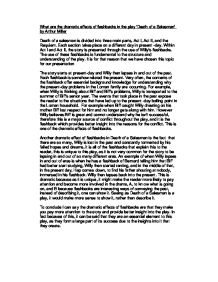 What are the dramatic effects of flashbacks in the play 'Death of a Salesman' by Arthur Miller?

What are the dramatic effects of flashbacks in the play 'Death of a Salesman' by Arthur Miller Death of a salesman is divided into three main parts, Act I, Act II, and the Requiem. Each section takes place on a different day in present-day. Within Act I and Act II, the story is presented through the use of w***y's flashbacks. The use of these flashbacks is fundamental to the structure and understanding of the play. It is for that reason that we have chosen this topic for our presentation The story starts at present-day and w***y then lapses in and out of the past. ...read more.

For example when Biff caught w***y cheating on his mother Biff lost respect for him and no longer gets along with him. However w***y believes Biff is great and cannot understand why he isn't successful, therefore this is a major source of conflict throughout the play, and it is the flashback which provides better insight into the reasons for the conflict. This is one of the dramatic effects of flashbacks. Another dramatic effect of flashbacks in Death of a Salesman is the fact that there are so many, w***y is lost in the past and constantly tormented by his failed hopes and dreams, it is all of the flashbacks that explain this to the reader, this is unique to this play, as it is not very common for the story to be lapsing in and out of so many different eras. ...read more.

This is dramatic because as it is unique, it might make the reader more likely to pay attention and become more involved in the drama, A, to know what is going on, and B because flashbacks are interesting ways of conveying the past, instead of describing it, one can show it. Seeing as Death of a Salesman is a play, it would make more sense to show it, rather than describe it. To conclude I can say the dramatic effects of flashbacks are that they make you pay more attention to the story and provide better insight into the play. In fact because of this, it can be said that they are an essential element to this play, as they form a large part of its success due to the insights into it that they create. ...read more.