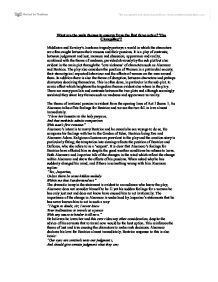 What are the main themes to emerge from the first three acts of 'The Changeling'?

What are the main themes to emerge from the first three acts of 'The Changeling'? Middleton and Rowley's Jacobean tragedy portrays a world in which the characters are often caught between their reasons and their passions. It is a play of contrasts; between judgement and l**t, measure and obsession, appearance and reality, combined with the theme of madness, provided obviously by the sub plot but also evident in the main plot through the 'love sickness' of characters such as Alsemero and Beatrice. The play also considers the position of Women in a patriarchal society, their stereotypical expected behaviour and the effects of women on the men around them. In addition there is also the theme of deception, between characters and perhaps characters deceiving themselves. This is often done, in particular in the sub-plot, to comic effect which heightens the tragedian themes evident else where in the play. There are many parallels and contrasts between the two plots and although seemingly unrelated they share key themes such as madness and appearance vs reality. The theme of irrational passion is evident from the opening lines of Act 1 Scene 1, As Alsemero talks of his feelings for Beatrice and we see the two fall in love almost immediately. "I love her beauties to the holy purpose, And that methinks admits comparison With man's first creation" Alsemero's intent is to marry Beatrice and he cancels he sea voyage to do so. ...read more.

Later Beatrice says: "What's Piracquo My father spends his breath for? And his blessing Is only mine as I regard his name; Else it goes from me, and turns head against me, Transformed into a curse" Her implication here is that the deliberate choice to go against her father's wishes makes her immoral and causes her to commit sin. Her feminine cunning is also displayed by her flirtation with Deflores when she decides she needs him in order to kill Alonzo and through her use of her virginity as a bargaining tool for more time with her father. As a parallel to the immorality of Beatrice-Joanna (whose barrelled name even suggests a deceitful double crossing nature) the audience is presented with Isabella in the subplot. As the wife to Alibius, a doctor in a mad house, she is treated as an object by her paranoid and jealous husband. Alibius shows how he views her by asking Lollio to make sure no one else sees her: "Here I do say must thy employment be. To watch her treadings, and in my absence Supply my place." He is paranoid as he is older than her and fears she will be tempted by a younger man. In the third act Isabella asks why she has been locked up, to which Lollio replies: "Tis for my masters pleasure, lest being taken in another man's corn" This displays his lack of trust in her but also his own fears and insecurity in being unable to satisfy his wife s******y. ...read more.

Outwardly Antonio pretends to be a fool and appears so to Lollio, yet in reality is sane and it is only part of a plot to woo Isabella. Lollio also appears to be a dutiful servant to Alibius in looking after his wife but his intentions are much more dishonourable. Even Isabella is much different to the audience than she appears to the characters, her dealings with Antonio and her speech to her husband shows she is intelligent and has foresight. 'The Changeling' overall is a play fuelled by fervour, l**t and a lack of reason. The latter is caused not only by the former but also by madness, which could arguably be seen to derive from the passions in the first place. The themes of passion, madness, deceit, appearance vs reality and of women's place in such a society are conveyed not only through the characters actions and words, but through the use of dramatic devices such as asides, for example particularly important for appearance vs reality, soliloquies, and through imagery and metaphor. The themes which have emerged from the play so far give a firm foundation for the development of the ideas within the plays and the morals it contains. Combined, the themes embody the title of the play, 'The Changeling' meaning a half-wit, a fickle person, or somebody swapped or changed for another; this reflects the changes that happen to many of the characters as the play progresses, many of whom who will eventually become unrecognisable. ...read more.