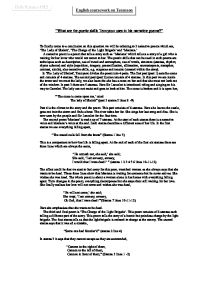 &quot;What are the poetic skills Tennyson uses in his narrative poems?&quot;

"What are the poetic skills Tennyson uses in his narrative poems?" To finally come to a conclusion on this question we will be referring to 3 narrative poems which are, 'The Lady of Shalott', 'The Charge of the Light Brigade' and 'Mariana.' A narrative poem is a poem that tells a story such as 'Mariana' which tells us a story of a girl who is waiting for her lover who would not return to her. The poetic skills that can be used in such poems are techniques such as description, use of mood and atmosphere, use of words, structure (stanzas, rhythm, rhyme scheme) and style (repetition, imagery, personification, alliteration, onomatopoeia, metaphor, contrast, simile), also narrative skills, e.g. suspense and tension (created within the story). In 'The Lady of Shalott', Tennyson divides the poem into 4 parts. The first part (part 1) sets the scene and consists of 4 stanzas. The second part (part 2) also consists of 4 stanzas. In this part we are inside the tower and we meet the lady, we also learn the she has a curse on her and that she must not look out of the window. In part 3 there are 5 stanzas. Here Sir Lancelot is introduced riding and singing on his way to Camelot. The lady can not resist and goes to look at him. The curse is broken and it is upon her, "'The curse is come upon me,' cried The lady of Shalott" (part 3 stanza 5 lines 8-9) Part 4 is the climax to the story and the poem. This part consists of 6 stanzas. Here she leaves the castle, goes out into the storm and finds a boat. The river takes her far. She sings her last song and dies. She is now seen by the people and Sir Lancelot for the first time. The second poem 'Mariana' is made up of 7 stanzas. At the start of each stanza there is a narrative voice and Mariana's voice at the end. ...read more.

Tennyson builds up to the contrast by first leading up to the fight. Then he mentions that the charge was a mistake but they can not escape as they are surrounded. Tennyson then builds up the tension by doing a battle scene but the brigade fail in the mission and many of them die. In the sixth stanza Tennyson honours the brigade even if they died pathetically. In 'The Lady of Shalott' Tennyson uses many figures of speech, such as imagery repetition, personification, alliteration, onomatopoeia, metaphor and simile. An example for imagery is, "Some bearded meteor, trailing light, Moves over still Shalott."(Part 3 stanza 3 line 8-9) This imagery shows us that Sir Lancelot moved across Shalott like a bearded meteor. This makes us think he is moving at speed. An example of repetition is, "The helmet and the helmet feather" (part 3 stanza 3 line 3) "Four grey walls and four grey towers" (Part 1 stanza 2 line 6) The effect of this repetition is that the pace of the sentence starts to quicken as we already know the word that is to follow. The word 'Shalott' and 'Camelot' are also regularly mentioned throughout the poem. The effect of these repeated words on us is like a magic spell as in magic spells words are usually repeated over and over again. An example of personification is, "The broad stream in his banks complaining." (Part 4 stanza 1 line 3) Tennyson brings the broad stream to life by giving them emotions and feelings with which they are complaining with. This poem also consists of much alliteration, "Bridle bells" (part 3 stanza 2 line 4) "Blazon'd baldric" (part 3 stanza 2 line 6) An example of onomatopoeia in the poem can be seen in part 3 when Sir Lancelot arrives, "He flash'd into the crystal mirror, Tirra lirra by the river" (part 3 stanza 4 line 7-8) ...read more.

One reason for this could be that the stanzas are of different lengths however there is a rhyming scheme which is applicable to all the other stanzas. A A A B C D D E D C F C The line lengths are short as Tennyson wants to quicken the pace. This contrasts with both 'The Lady of Shalott' and 'Mariana' as they have long line lengths. The rhythm of the poem is usually 6 6 6 5 6 6 6 7 5 Tennyson tries to get the same rhyming scheme in each stanza. The lines which rhyme sometimes have the same syllables. In conclusion I will say that Tennyson uses a variety of poetic skills. He uses skills such as description, use of mood and atmosphere. His word, the structure of the poem (stanzas, rhythm, rhyme scheme) and style (repetition, imagery, personification, alliteration, onomatopoeia, metaphor, contrast, and simile) also he uses narrative skills which make the poem have a significant story. Overall there are many comparisons and contrasts between all the poems. One comparison is the theme in all the poems. All three poems have a theme of death, in 'The Lady of Shalott' the lady dies after breaking the curse. In 'Mariana' the lady wishes to be dead and in 'The Charge of the Light Brigade' the brigade enter "the valley of death" and die. Also the story of 'Mariana' compares much with 'The Lady of Shalott'. In 'The Lady of Shalott' the lady is trapped in a tower and is waiting for someone to save her and in 'Mariana' the lady is trapped in a house all alone and is waiting for her love to return. The contrast is the pace of the poems. 'The Charge of the Light Brigade' has a fast pace. Tennyson does this by making the lines short with short syllables. However 'Mariana' and 'The Lady of Shalott' have a slow pace. This is done by Tennyson using long syllables and more words in each line. This is done to suit the genre of each poem and Tennyson does this very well. ...read more.

The writer focuses throughout on poetic skills, making references to metaphors, onomatopoeia and other devices used by Tennyson. In the first two paragraphs his response is extremely explicit, as he simply lists different poetic devices. To an extent this is ...

The writer focuses throughout on poetic skills, making references to metaphors, onomatopoeia and other devices used by Tennyson. In the first two paragraphs his response is extremely explicit, as he simply lists different poetic devices. To an extent this is a good guide for the reader as to what is to be discussed, but it feels more like a long list of generic skills that a poet can use to emphasis a point, which isn't focused enough on Tennyson and the three poems at hand.

Analysis is generally quote-driven, which is good as it shows that the writer has used the texts themselves as a basis for points. However, at times the analysis is a little superficial: Ã¢â‚¬Å“making the reader remember these words as definite and most important.Ã¢â‚¬Â Why are these particular words important? Why would Tennyson want the number Ã¢â‚¬Å“six hundredÃ¢â‚¬Â to be remembered by the reader? What is it about six hundred that is striking? This analysis and the evaluative Ã¢â‚¬Å“whyÃ¢â‚¬Â would open the essay up for a deeper consideration of meaning; the writer does often say Ã¢â‚¬Å“this may be /this could beÃ¢â‚¬Â (such as when discussing the rhythm and structure of the three poems), showing that he has considered a range of interpretations. To extend this he could evaluate which interpretation seems the most likely given other poetic devices, and compare the importance of different devices used. Comparison between texts is done throughout; such intertextuality meets expectations for written work at A Level as it shows that the writer doesn't just consider a poem as a static text within a literary vacuum.
The conclusion is appropriate and concurs with the introduction and the main body of the essay, and the writer both summarises and adds an extra element of final comparative analysis to the essay, which is good; a conclusion should not just summarise the main points of an essay, but bring the points together in a new way.

Throughout, the writer addresses the reader relatively personally, using Ã¢â‚¬Å“weÃ¢â‚¬Â and Ã¢â‚¬Å“IÃ¢â‚¬Â instead of the 3rd person, which makes the essay seem more informal and less like an academic essay. Grammar is adequate but flawed throughout Ã¢â‚¬â€œ for instance, he writes, Ã¢â‚¬Å“The line lengths are long this is a comparison with 'Mariana'Ã¢â‚¬Â, which does not make much grammatical sense. In this way the essay does not meet expectations for A Level, but overall the analysis covers a wide range of devices (from language to form and structure) and thus redeems the essay.